As 'Imagine' is declared 'song of the century,' Yoko Ono finally gets songwriting credits | Inquirer Entertainment

As ‘Imagine’ is declared ‘song of the century,’ Yoko Ono finally gets songwriting credits 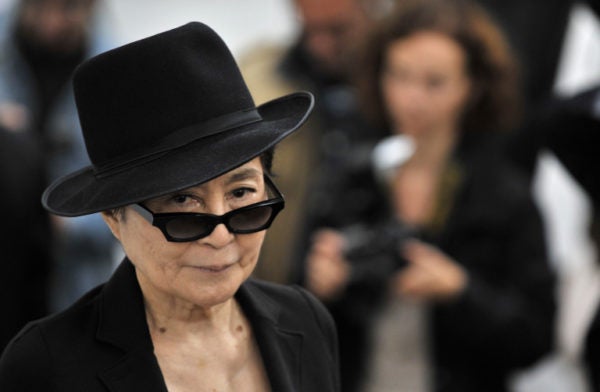 Nearly half a century after John Lennon released “Imagine”, his widow and artistic collaborator Yoko Ono will be listed as a co-writer.

The announcement was made as the iconic 1971 ode to world peace was declared “song of the century” at a gala Wednesday in New York of the National Music Publishers Association.

As Oko and their son Sean Lennon came up to receive the trophy, the association announced unexpectedly that Oko would join John Lennon on the songwriting credits.

The gala played a BBC interview with John Lennon in 1980, shortly before he was assassinated, in which he said that “Imagine” was inspired in part by lines in Ono’s conceptual art book “Grapefruit”.

“‘Imagine’ should have been credited as a Lennon/Ono song. If it had been anyone other than my wife I would have given them credit,” John Lennon said.

Sean Lennon later wrote on Facebook that the announcement was the “proudest day of my life.”

Punk godmother Patti Smith and her daughter Jesse Smith marked the occasion by playing “Imagine” as mother and son accepted the award.

Ono, herself established as an avant-garde artist when she met the then-Beatle, collaborated closely with Lennon and has sought to preserve his legacy since his death.

“Imagine”, with its call for a world without divisions, remains one of pop music’s most recognizable tracks and an anthem of peace activists.

Ono is unlikely to see any personal windfall in the immediate future as she already is the heir to Lennon’s estate.

But the change could have a practical effect, as under United States law, songs come into the public domain, meaning writers no longer receive royalties, 70 years after publication, with Ono’s addition potentially extending the period.

Ono herself had a well-publicized feud with Beatle Paul McCartney over songwriting credits. The Beatles generally signed songs as “Lennon-McCartney,” with the longtime friends sharing credit for some of the music industry’s all-time hits.

After the group broke up, McCartney began to flip the order to McCartney-Lennon in songs on which he said he took the lead, raising objections from Ono. JB