U2 expands ‘The Joshua Tree’ tour 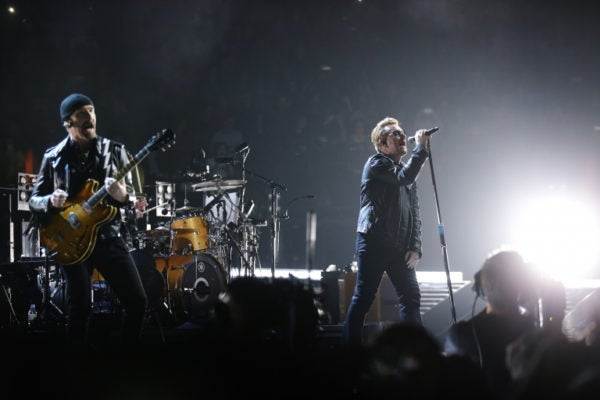 U2 singer Bono (R) and guitarist The Edge(L) perform on stage at the Bercy AccorHotels Arena in Paris on December 6, 2015. Image: AFP/Thomas Samson

U2 is marking the 30th anniversary of its seminal album “The Joshua Tree” with a worldwide tour and has just announced a new round of dates in North and South America.

First announced in January, the tour launched on May 12 in Vancouver, Canada, kicking off a series of North American dates. In July, the band will begin a European leg, starting in London on July 8 and wrapping up in Brussels on August 1.

Newly announced dates include another run of shows in the United States, with stops in Detroit, Buffalo, Minneapolis, Indianapolis, Kansas City, St. Louis and San Diego. In October, the band will perform in Mexico City, Bogota, Buenos Aires, Santiago and Sao Paulo.

Tickets for the newly announced shows will go on sale June 8 to 10 for U2.com subscribers. Find tour dates and information at www.u2.com/tour. JB

TAGS: Concerts, The Joshua Tree, U2