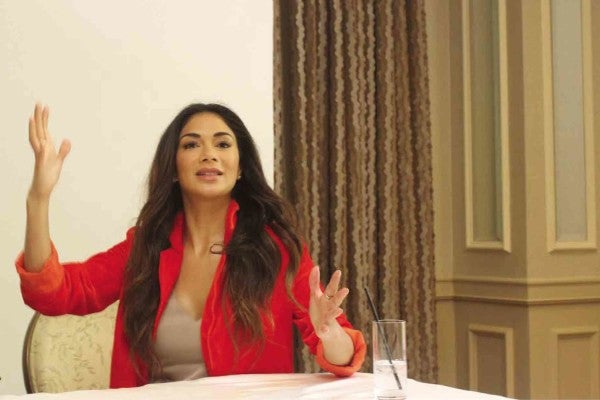 LOS ANGELES—“Filipino pride!” Nicole Scherzinger exclaimed at one point in our recent chat at the Four Seasons Hotel. Nicole, striking with her long brunette hair and wearing a bright-red pantsuit, a taupe blouse and mile-high platform sandals, could win a Binibining Pilipinas (Miss Philippines) title hands down.

The singer continues her foray into acting by playing Penny (originally played by Cynthia Rhodes) in Lionsgate TV’s remake of “Dirty Dancing,” the 1987 movie that starred Jennifer Grey and the late Patrick Swayze.

Complimented on her beautiful brown skin, the performer, born to a Filipino father (Alfonso Valiente) and a Hawaiian-Russian mother (Rosemary Scherzinger), reacted with, “You’re so sweet. I love you. Filipino pride! Obviously, I don’t have Cynthia Rhodes’ color.”

The former back-up singer, who became the headliner of The Pussycat Dolls, is grateful to director Wayne Blair for casting her in “Dirty Dancing,” which features Abigail Breslin and newcomer Colt Prattes in the roles played by Jennifer and Patrick, respectively.

“I love the film, ‘The Sapphires,’ by Wayne because it was about women of color,” said Nicole, who earned a Laurence Olivier Award best supporting actress in a musical nod in her West End debut as Grizabella in Andrew Lloyd Webber’s “Cats.” “It meant a lot to me that Wayne was open to casting me because I was this color. I’m just really proud to be able to represent my people in Hawaii and the Philippines.”

The Hawaii native, who voiced Sina in Disney’s animated film, “Moana,” acknowledged her heritage’s role in her musical and dancing inclinations.

“Yeah, it’s everything,” she said. “I feel like some of the best voices in the world are Filipino voices. I got my voice from my Hawaiian side, too—my grandmother. But Filipino people can sing, right?

“I grew up in a family where my grandmother sang and always played the ukulele. My mother was a hula dancer. But we didn’t have the means or the money to help put me through classes or be taught any lessons.

“So, I think it’s a God-given gift. That’s the only way I knew how to express myself, because I was shy as a kid. Growing up, I just loved music. I wanted to be Whitney Houston.”

Added the talent who was raised in Kentucky (where Nicole’s mom moved after separating from Alfonso and where she met Gary Scherzinger, who adopted Nicole and her sister), “Then, the dancing came later. I learned hula dancing at a young age. My mother always taught me to be graceful. It wasn’t until I got into a youth performing arts school that I started learning more musical theater stuff.

“When I was a Pussycat Doll, it was all dancers. So, being out in the front, I had to pick up fast and make myself look just as good as everybody else.”

As part of The Pussycat Dolls, she bagged several music nominations, including nods from the Grammy, American Music, Billboard and MTV Awards, and racked up several No. 1 singles. As a solo artist, Nicole sold 16 million records.

Nicole, who appeared in several series before cinching the role in “Dirty Dancing,” loved her experience acting in the TV movie. “If I talk about it, I might tear up,” she admitted. “I was actually out for another role in a movie that’s out about right now. I was like, my life is over because I’m not in ‘Baywatch.’ Then, this (‘Dirty Dancing’) came along the week after.

“It was what I was praying for to be able to act, sing and dance. With this cast, director and the team of people that we had, I’m truly grateful for the learning experience. We were stuck in a lodge in the middle of North Carolina. We were such a tight family—and that meant a lot.”

On the “Baywatch” part that slipped from her, Nicole dished, “It was between myself and the girl (Ilfenesh Hadera) who obviously got it, not me. It was the chick with the skin like mine. Not Priyanka (Chopra)—
the other one. It was meant to be her role, because she’s gorgeous. God had something else for me—this role. I couldn’t have asked for a better role. I prayed for this.”

She further revealed, “I got to showcase the different talents I have. I just believed in the story and the cast, so it worked out. Sometimes, you don’t think things work out, but it’s for a bigger plan. So, keep the faith.”

While she has acted on TV shows, Nicole admitted that she was nervous on her first day on the “Dirty Dancing” set.

“They did a whole scene in the dance studio. My two words for the day were, ‘Good luck.’ I forgot how to speak. I was like, ‘Good luck?’ I said it so many different ways. I was dying inside. It was so silly. It’s like the time I took a picture with Sting and forgot to smile.

“But after that, our cast was such a tight family. We worked so closely with our director, Wayne. Before that, we had been together for over a month. And Abby (Abigail Breslin), she’s so brilliant. She’s always there, so helpful. I learned so much from her. It was such a supportive cast.”

Asked when was the last time she had the time of her life, to paraphrase “(I’ve Had) The Time of my Life,” the popular song in the soundtrack (the cast also recorded its version), Nicole said, “It was recently. Don’t judge me. But I did something I never thought I’d do. I went to a Tony Robbins seminar. If you’ve seen his ‘I Am Not Your Guru’ on Netflix, there’s a lot of people jumping around, really excited. I was, nope, not doing it.

“But when I got there, I was the front row center cheerleader, jumping around. I’d never experienced anything like that. It was four 16-hour days. I walked on fire. I broke through to the other side.”

The ambassador for Unicef and the Special Olympics flatly denied the buzz that she’s in talks to play Elphaba in the movie adaptation of Stephen Schwartz’s “Wicked.”

With a laugh, she recalled, “I saw a lot of my family, and they were like, almost in unison, ‘Congratulations! We can’t wait to see you in ‘Wicked.’ I was, what? No, I’m not in ‘Wicked.’ I don’t know where they got that. Then, the ‘Dirty Dancing’ cast text group, one by one, texted their congratulations and that they were proud of me. They were very excited. But I’m not in it.”

However, Nicole stressed that she’d be excited if she were really considered for the long-awaited big-screen version, set for a 2019 release and to be directed by Stephen Daldry, with Stephen and original book writer Winnie Holzman tapped to write “at least” two new songs.

“Oh yeah, I’d love to be in it, absolutely,” Nicole enthused. “Anything musical. I love musicals. I’m the biggest musical nerd.”

What Nicole did not deny outright were the reports that Mariah Carey will join her in the judging panel of this year’s “The X Factor.”

“Oh my gosh, Mariah,” she began. “How awesome would that be? I love her. I can’t confirm anything, but I’m really excited about the possibility of getting back there and working with my panel of judges. I’m close to Mrs. O (Sharon Osbourne), Louie (Louis Walsh) and Simon (Cowell). It’s looking cherry. It’s looking roses.”

But Nicole is most pumped up about her acting career. “I’m getting the [acting] bug. I like this. What movie’s next, guys?”