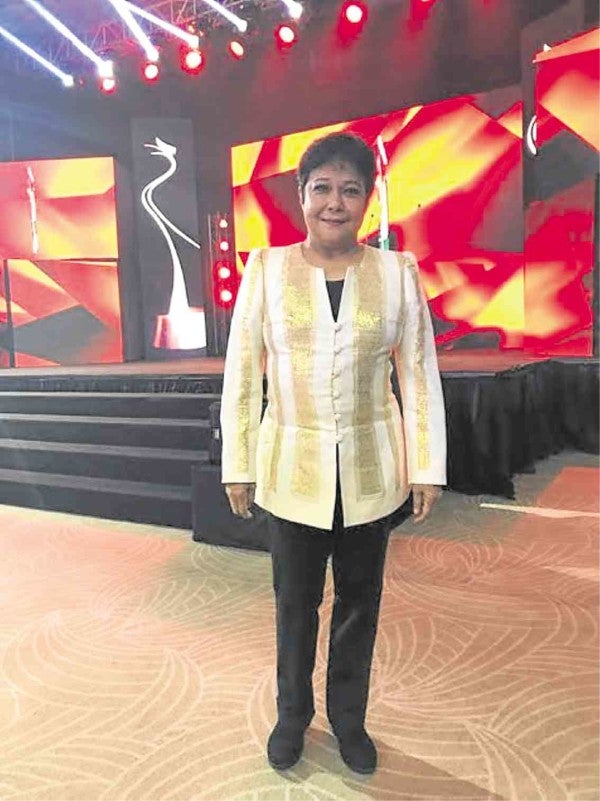 In time for her 50th anniversary in show business, Superstar Nora Aunor is finally embarking on a series of treatments and therapy sessions to recover her golden voice.

With the help of the religious group “Ang Dating Daan,” she had undergone two checkups in Singapore and Manila.

“The doctors here and abroad had the same findings,” La Aunor told the Inquirer in Filipino. “They said that luckily my vocal chords were not damaged.”

The Superstar lost her singing voice after a botched cosmetic surgery in Japan seven years ago.

“But I still sense something is wrong,” she explained. “There was a hole in my throat.”

When she was in Malaysia recently, where she presented the Lifetime Achievement honor at the Asean International Film Festival and Awards, she had an interesting chat with fellow singer-actress Cherie Gil.

Gil had throat surgery in the United States in 2012.

Aunor expressed her gratitude to “Ang Dating Daan,” particularly TV anchor Daniel Razon and church leader Eli Soriano. “They, along with Robert Navoa and Melanie Quiambao of UNTV Singapore, took care of us while we were there. They were the only ones who went all out in helping me.”

These days, she is also undergoing therapy sessions with voice teacher Kitchie Molina.

“I do vocalization exercises, to strengthen my voice” she related. “Hitting high notes can be difficult sometimes, but I remain hopeful.”

She said she was “101 percent” certain that she would be able to sing again soon. Perhaps in time for her grand 50th anniversary celebration that is being organized by loyal Noranians within the year?

It was in 1967 when then 14-year-old Aunor first skyrocketed to fame, after topping the talent tilt, “Tawag ng Tanghalan.”

Her fans are likewise planning a big party for her 64th birthday on May 21.

“I miss singing onstage,” she owned up. “I miss doing concerts. I even miss rehearsing. I really want to sing again. Music was how it all started for me.”

On the movie front, she is slated to topbill “Immaculada,” a film on incest to be directed by Radyo Inquirer’s Arlyn dela Cruz.