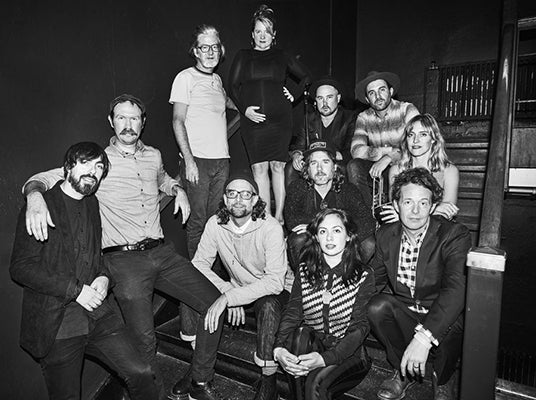 “Hug of Thunder”, the long-awaited follow-up to the band’s first effort since 2010, will be out this summer.

The Canadian indie rock musical collective has included a sliding scale of six to 19 members since it formed in the early 2000s. Started by Kevin Drew and Brendan Canning, their 2002 breakout album “You Forgot It In People” was the joyful banding together of friends. The 2005 follow-up frayed into solo endeavors and outside pursuits by the assorted members.

“It was a little scattered,” Kevin Drew told Billboard in 2010 of the recording operative. “When you have a big group of people, it’s hard to find a ground to stand on.”

Pitchfork described their previous album, “Forgiveness Rock Record”, released seven years ago, thusly: “Broken Social Scene know all about heartbreak—they’ve spent most of the last decade crafting songs about it with almost unparalleled zeal. Their story is filled with scurrilous encounters, backstabbings, and break-ups on par with most 70s arena-rockers, and they’ve crashed and rebuilt so many times that it’s nearly impossible to keep track of who was where at any given moment.” But, that adaptability is ultimately the band’s asset: “Their ambition is intact.”

The band made their return this March with “Halfway Home”, performed on “The Late Show With Stephen Colbert”.

Long-time contributing musician Leslie Feist (who just released her album “Pleasure”) described the process of making the titular track to Stereogum: “We were all in the same room and Brendan Canning just started to play a bass line just to shake us up. Then I started to improvise. Andrew Whiteman added a drum beat. Next thing you know, Charles [Spearin] is improvising, too. We all caught that momentum and played for 15 minutes. When we were done, Kevin [Drew]—who had been sleeping on the couch—woke up and was fist pumping, yelling ‘Record that!’ That was the birth of the song… It was way less splitting hairs than when I work by myself, because when else do I get to be caught in that type of momentum with all these people I’ve known my whole life?”

The band has announced summer tour dates on their website, starting with gigs at the end of May in the United Kingdom and a return to their native Canada in August for Montreal’s Osheaga festival.

“Hug of Thunder” will be out July 7 (via City Slang/Arts & Crafts). JB