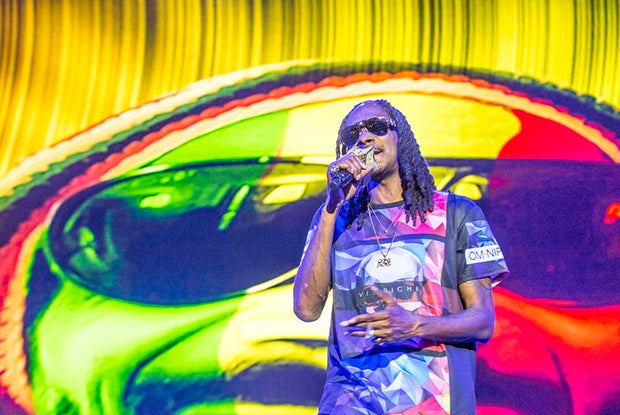 When Snoop Dogg performed at a jazz festival, the star of the show wasn’t him: it was the show’s sign language interpreter.

The interpreter, using American Sign Language, not only translated but also danced along with the rapper’s tracks, from 50 Cent’s “P.I.M.P.” to DJ Khaled’s “All I Do Is Win”.

The video was featured on the Facebook page of “The Good Life Radio Show”, a radio program of urban talk radio station WBOK 1230 AM.

One commenter identified the woman as Holly Maniatty, a certified sign language interpreter. She has been a constant in rock and hip-hop concerts in the United States, and has also been featured in the late night talk show Jimmy Kimmel Live for her work.

Netizens on Facebook admitted they didn’t even notice the hip-hop star because of Maniatty’s expressive gestures.

“If we merely show the sign for music, we are doing an injustice as an interpreter,” said Gallego, who has interpreted for over 400 artists.

The interpreter’s challenge is to turn a song into a visual presentation that the deaf can relate to. This includes translating the song from English to American Sign Language, and capturing the artists’ musicality in their movements and expressions. Gallego cites that signing the national anthem for Whitney Houston versus Barbra Streisand would result in vastly different interpretations.

As per the Americans with Disabilities Act of 1990, concert venues are required to provide interpreters for deaf attendees. While it has yet to become mainstream for all concerts, the interpreters’ commitment to translating music is a crucial part of the deaf community’s music experience. JB

Have you heard the news?: Reporting in sign language