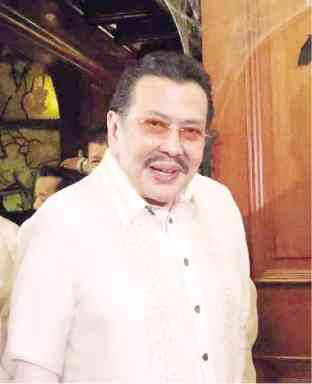 A couple of weeks before his recent 80th birthday bash, we met up with former President Joseph Estrada at Manay Ichu Maceda and Boots Anson-Roa’s own “twin” natal-day celebration, and were gratified to see him looking and acting so jovial and perky. If turning 80 is as upbeat a prospect as this, let’s all look forward to our own “octo” milestone!

We got to know and appreciate Joseph Estrada really well in the ’70s and ’80s when, through one of his fave directors, Chat Gallardo, the famous star-producer, got us to write some scripts for his film production company.

Erap’s studio specialized in action blockbusters, so “going action” was initially a stretch for us. But, we quickly adjusted, and Erap and Chat turned out to be fun and great to work with.

So, we had a most memorable decade collaborating with them, on hit and acclaimed films like “Ransom,” “Arrest the Nurse Killers” and some “Erap” comedy flicks. In the process, we learned a whole lot about making good movies in the real film world, as opposed to textbook ideals.

Yes, Joseph was a major star—but it turned out, happily for us, that he was also a good and very professional producer, who bankrolled movies that were both popular and acclaimed. So, we loved working with him and Chat, and also with his younger brother, Jesse Ejercito.

In addition to making creditable films, we’re grateful to Joseph for including us in his efforts to uplift the Filipino movie industry, which reeled from unfair competition from foreign imports that the local audience was “colonially” trained to prefer.

We were there from the very start when Joseph teamed up with Manila Mayor Antonio Villegas for the first Manila Film Festival, which for the first time gave preferential treatment to local movies.

The effort was so successful that, in only a few years, it turned the moviegoing situation around, as many more people belatedly realized that we could make really good films and more movie houses welcomed Filipino productions.

We also thank Joseph for tapping us, along with Lamberto Avellana, to direct the big fundraising show at Araneta Coliseum that generated the seed capital needed to create Mowelfund (the Movie Workers Welfare Foundation Inc.), which to this day spends millions to help thousands of film workers and their needy families.

In addition, Joseph opened many doors to us and made it possible for us to interact with other big stars and power brokers, thus boosting our film career in a major way.

He and industry leaders, Eddie Romero and Manay Ichu Maceda, also trusted us enough to tap us to head the Film Academy Classification Board, which led the fight against film censorship by providing a “classification” alternative.

It was an uphill battle at the time, since some politicians and civic leaders felt that film people were “incapable” of regulating themselves and their products.

But, in only a few years, we were able to prove that we did possess that judicious acumen—so, a major victory was won when the country’s entire TV-film vetting system was changed—from the Board of Censors to the Movie and Television Review and Classification Board!

Thanks, Joseph, for all of these golden opportunities to serve—and the “real-life” filmmaking lessons learned.