How Gloria Romero keeps herself in shape at 83 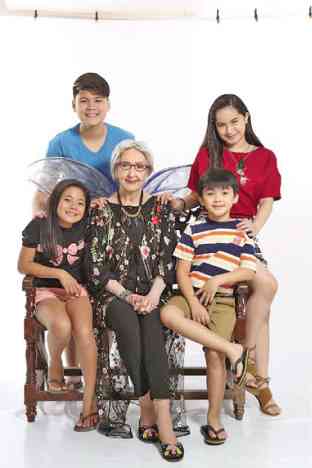 As a teenager in the 1950s, Gloria Romero wanted to see actors Tita Duran and Pancho Magalona at close range. And the mere idea of becoming a bit player at Sampaguita Pictures was more than enough to make her feel giddy.

Now 83, she’s one of Philippine cinema’s most celebrated stars, with a career spanning more than 60 years. But still, the actress said, the passion for acting remains.

“To this day, I get excited when I do new projects, when there’s something new to discover. Love for the craft has always been there,” she told reporters at a press conference for the children’s fantasy show, “Daig Kayo ng Lola Ko” (Sundays, GMA 7).

“If I read a script, and it touches me or makes me cry, I get really inspired,” she added.

According to Gloria, it helps that the projects she’s been doing these days require her to work with young up-and-comers. “Being around them … nakakabata! I have no complaints. They’re patient, talented and sweet,” related the seasoned actress, whose “Daig Kayo ng Lola Ko” costars include Jillian Ward, David Remo, Chlaui Malayao and Julius Miguel.

“Sometimes, I get embarrassed because it’s me who actually buckles and makes mistakes,” admitted Gloria.

She makes sure to greet show biz newbies or engage them in a conversation when she chances upon them.

“I do that because I clearly remember how I felt whenever my idols acknowledged me—like I was in heaven!” she explained.

While her work load for the show is relatively light, it’s still quite a challenge because she has to learn modern slang.

“I didn’t know what terms like Momol (make-out, make out lang), Yolo (you only live once) meant, so I ask the staff to bring me up to speed on those terms. That way, I could react correctly to my coactors,” said Gloria, who’s also surrounded by a young cast in the soap, “Meant to Be,” which is topbilled by Barbie Forteza.

“Barbie, I must say, is very good, be it comedy or drama. She has wonderful timing,” she said. “And I told her that she reminded me a great deal of the late Nida Blanca.”

One of the questions she usually gets from people is this: “Why haven’t you retired yet?” That wouldn’t happen just yet—not while she could still memorize lines, she said. And except for her vertigo, which occasionally makes working on set hard, Gloria is in very good shape. She gets nine hours of sleep. Her exercise comes in the form of pushing carts at the grocery.

“Sometimes when people see me, they ask how come I can still walk. But aside from my vertigo medication, I only take regular vitamins. I eat as I please, but in moderation, of course—I want to live and be with you longer!” Gloria quipped.