Julie Andrews at 81: I did what I hoped was right—and I got lucky 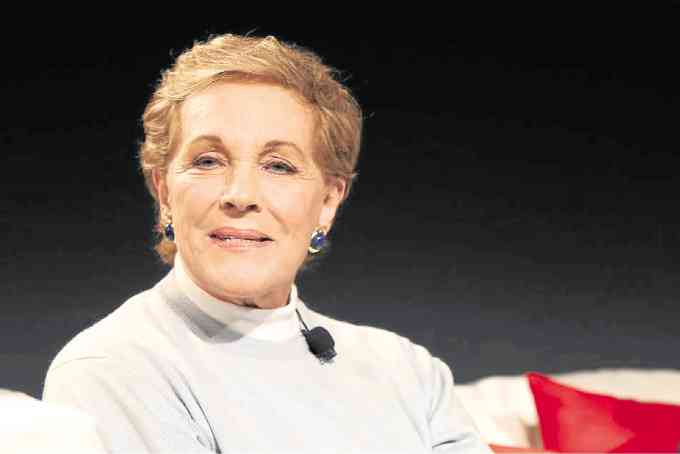 But, we couldn’t stop the fan in us from emerging when we saw the Oscar-winning actress looking slim, lovely and radiant as she made her way to the panel discussion for her 13-episode preschool series, “Julie’s Greenroom,” now streaming on Netflix.
After all, this was the woman who breathed potent and pulsating life into Eliza Doolittle (“My Fair Lady”) and Queen Guinevere (“Camelot”) on Broadway and the West End—and, even more famously, Maria (“The Sound of Music”) and the lead characters of “Mary Poppins” and “Cinderella” on the big and small screens.

For millennials and Gen Xers, Dame Julie is best remembered for playing Queen Clarisse Renaldi in “The Princess Diaries” films, and for lending her voice to the “Shrek” and “Despicable Me” animated movies.

Devoid of the self-entitled air and overconfidence we expected from someone so famous, Julie was humility and honesty personified.

When the subject of singing came up, the actress wore her heart on her sleeve as she conceded, “I don’t sing the way I used to, but I still got a few [songs left in me].” When the puppet Spike (Frankie Cordero) complimented her on her singing, the actress quipped, “I belt them out, one way or another—or I sing-speak.”

In 1997, the actress irreversibly damaged her pristine soprano trills after going through a botched throat operation to remove noncancerous nodules on her vocal chords, compromising her famous four-octave range and ability to hold notes.

But, as her latest show demonstrates, the actress can still whip up some appealing notes with her hefty albeit throaty midregister.

When we finally came face-to-face with the actress the day after the panel discussion, the actress was even more candid: “If I could, I’d love to act in more movies, because I can still bring joy to people. Now [that I’m older], I know a little more than I used to. I’ve been doing some directing lately. Three of my [children’s] books have been developed to some degree—two of them as musicals (a musical theater production, and a narrated concert with symphony). Another one is being reimagined as a TV show for another network.

“I’m also in the process of writing Part Two of my memoir (2008’s ‘Home: A Memoir of My Early Years’) with my daughter, Emma Walton Hamilton, who coproduced ‘Julie’s Greenroom’ with me and Lisa Henson (CEO of the Jim Henson Company).”
“Greenroom’s” exceptional guests include Josh Groban, Idina Menzel, Alec Baldwin, Sara Bareilles, David Hyde Pierce, Joshua Bell, Chris Colfer and Carol Burnett, some of them performing songs exclusively written for the show.

Asked why she thought of doing the show, Julie stressed the need to talk about performing arts to children, because “there [wasn’t] enough of it.”

Julie told us how she became interested in the arts as a little girl: “I was very young when my aunt took me to the ballet. I saw this most beautiful piece by [Maurice] Ravel (who’s most famous for ‘Bolero’ and ‘Pictures at an Exhibition’)—and the music, story and the sound of it were beautiful. I was way up high in ‘the gods’ (highest area in the balcony), but it so captivated me that I walked away from the theater and bought a copy of the album. Thereafter, I wanted to watch other ballets… That’s why we need to foster and promote appreciation for the arts.”

Emma, who runs her own theater school, couldn’t agree more: “I know from hands-on experience that there’s no better way to teach kids teamwork, communication skills and problem-solving than through the arts. But, you have to start early because, otherwise, it could seem intimidating to them. If you wait too long, they start to feel like, ‘I’ll never be good at this.’

“Statistics show that children exposed to the arts grow up to be more successful, professionally and academically. They’re better at math and interact well with other people. They’re more inclined to vote, engage in philanthropic work, and watch theater shows. The ramifications are huge.”

Emma has cowritten about 30 children’s books with her famous mother. But, she said “Greenroom” was their first time to do a TV show together.

“Mom and I are passionate about what we do,” she said. “The lovely thing about our collaboration is that we respect each other. I know mom won’t get mad at me if I said ‘no,’ because it’s about making the best product possible.” 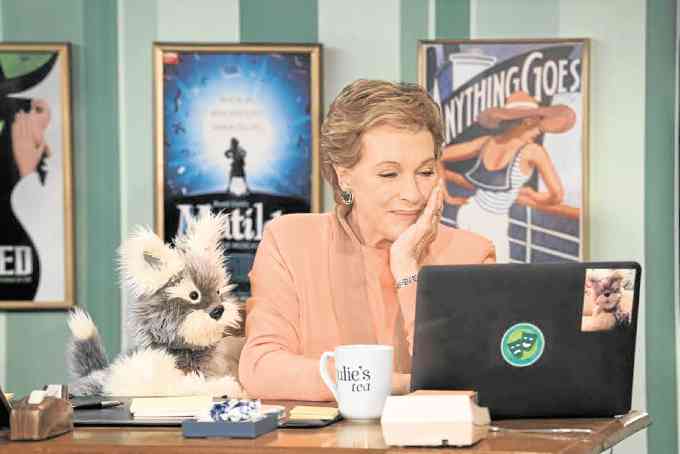 Asked how Julie was as a mother while she was growing up, Emma answered, “The good news is, she was a wonderful, devoted and very attentive mother. I was aware that she had a professional life but, sometimes, it was difficult to share her so much!

“I sometimes felt very ‘protective’ and possessive of her if too many people wanted her autograph—so, I’d go, ‘She’s mine (laughs)!’ Yes, it happens a lot, but it does get better. The thing that I most respond to is the human being she is, not the famous actress everybody loves.

“The show reaffirmed the fact that she’s a disciplined performer. And because we had to follow a very tight shooting schedule, she worked for 12 hours straight without complaining. The other actors and puppeteers said, ‘The oldest person in the room isn’t complaining, so why should we?’ (laughs)”

And, no, there won’t be a “Sound of Music” reunion in the show, said Julie: “I don’t think [that’s going to happen]—because Miss Julie is not Julie Andrews. She’s just a character who runs a theater and loves her students, who just happen to be puppets.”

The actress’ timeless artistic contributions like “The Sound of Music” and “My Fair Lady” bring happiness and joy to people from all walks of life. Didn’t her followers’ larger-than-life expectations of her stifle her growth as a person and artist?

Julie mused, “I’ve always known that those were the most phenomenal projects that could ever be handed to me. I’m blessed because I was the lucky one who was asked to do them. I didn’t make them happen—somebody came and said, ‘We’d like to try and use you.’ But I always wondered if I was good enough?

“Do I still doubt myself at this point? I still do! Will ‘Greenroom’ be a success? Did we make the right choices? [But I realize] I’ve been more blessed than anybody I can imagine.

“This may sound a little Pollyanna, but [I think what I was able to do was] build goodwill. I’m benefiting from all the things I’ve done that have come to make the whole thing possible. I do know that those are just roles, and then there’s me.

“So, yes, they all go together, because I’m associated with them. [They’re a convergence] of everything my parents taught me … and all the things that I watched and learned from other people. I did what I hoped was right—and I got lucky!”