Report: Will Smith in talks to play genie in ‘Aladdin’ remake 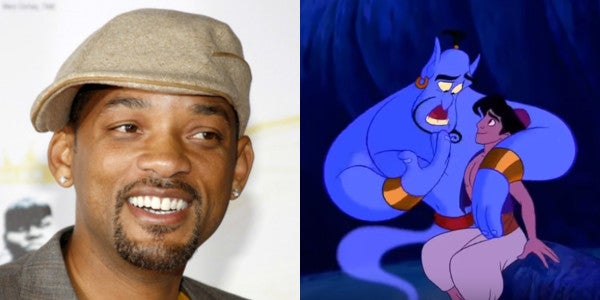 Will Smith and Genie from Aladdin. YouTube/ INQUIRER FILE PHOTOS

Will Smith is currently in talks to play the role of the genie in the live-action remake of “Aladdin.”

According to a report by Deadline, the actor-comedian might play the character voiced by the late Robin Williams in the 1992 Disney animation. Smith was previously offered to star in “Dumbo,” but retreated due to overlapping schedules with his other projects.

The classic is based on a Middle Eastern folk tale of a penniless man who was granted three wishes by a genie held captive inside a magic lamp. As one of his wishes, he morphs into a sultan’s heir, wins the feelings of Princess Jasmine, and eradicates the reign of an errant vizier.

“Aladdin” was one of the highest-grossing Disney films and scored two Academy awards including the Best Original Song for “A Whole New World.”

Following the pioneering success of “Beauty and the Beast,” and “Jungle Book,” the entertainment company has confirmed other live-action reboots, such as “Mulan,” “The Lion King,” “101 Dalmatians,” “Mary Poppins,” “Snow White and the Seven Dwarfs,” and “The Little Mermaid.”

Guy Ritchie is set to direct the live-action film, which is slated for release next year. A worldwide casting has been commenced for the leading roles of Aladdin and Jasmine.  Gianna Francesca Catolico /ra