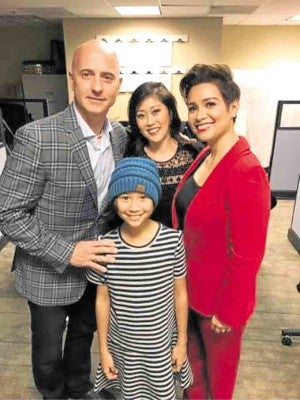 LOS ANGELES—We have now arrived in sunny Southern California and, thankfully, my daughter Nicole and I will be able to get ourselves a break from the jet-set life.

Although there’s a concert and one master class scheduled for this week (both at Pepperdine University), the majority of our time here will be spent with friends and family. There are many Salonga cousins, a few pals from childhood, and members of Rob’s Chien and Hayashida clans.

Our travel karma hasn’t always been fantastic, as we have hit delays at every turn thus far, whether it’s caused by the weather or airport traffic. Hearing about a passenger being literally dragged off a flight on another carrier hasn’t been encouraging, either. So I wondered: What else could we possibly face as we fly from state to state?

Well, one travel delay  has turned into something sweet.

We were all waiting at Salt Lake City Airport for our flight to San Francisco. All the passengers had already boarded when the captain announced that due to weather conditions at SFO, our flight would be delayed. Another delay? That didn’t bode well for our little group.

But not even five minutes passed when the flight attendant approached me and Nicole and asked, “Would your daughter like to see the flight deck? The captain has invited the kids to come up and visit.”

Nic’s eyes lit up like a Christmas tree. She got out of her seat, I grabbed my camera, and off to the cockpit we went. The captain had Nicole sit in the pilot’s seat, wear the captain’s hat and smile. The other kids on the flight then had their turn, and they too were buoyed up by the flight crew’s kindness.

We were grounded for about an hour while waiting for the SFO control tower to give our flight the go-ahead to take off. And my little one was smiling for much of it.

Nicole had a full day with her cousins in Concord (thanks to her Auntie Renee and Uncle Adrian for picking her up), so I had an afternoon to myself before my Feinstein’s show.

I headed up Union Square to 648 Bush Street on the invitation of Marvin Agustin (yes, that Marvin Agustin) to have lunch at his new venture, Bao Down. It’s a franchise of a
Vancouver gastrobar that serves Asian fusion food, and much of it is familiar to the Pinoy palate.

I chose the spicy chicken and ube waffle topped with fried eggs (the whole thing is gluten-free), and a glass of calamansi juice. It was delicious! Marvin then had another dish brought out called The Hangover: kurobuta pork, garlic rice, fried eggs, tater tots and fresh fruit. 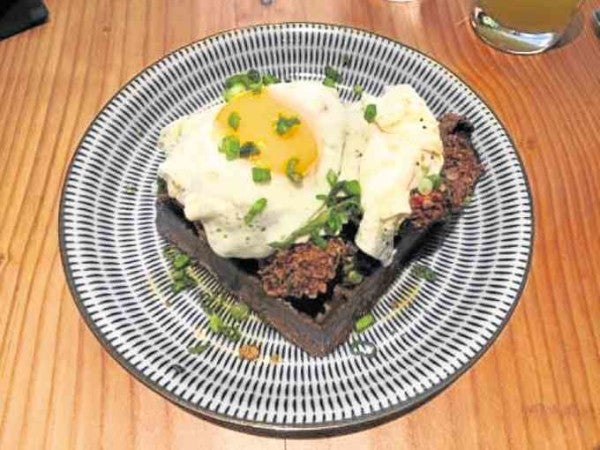 Thank you again, Marvin, for extending the invite. It was a wonderful way to spend a cloudy afternoon in San Francisco. I would strongly recommend giving this place a go, as their food is fantastic. Cheers!

Thanks to TFC.tv, I got myself caught up in the pilot episode of “The Voice Teens.” (Speaking of which, we had excellent ratings for it! Thanks so much for tuning in.) When we spend those long days in the studio taping Blind Auditions and the other prerecorded sections of the season, we don’t always know how things will be pieced together. So I tuned in, and I was very happy.

So far, each coach has one brand-new teen artist joining their teams: Team Sarah’s first one is Mikko Estrada, who auditioned with Iñigo Pascual’s hit song, “Dahil sa ’Yo” (what a lovely surprise, therefore, for Iñigo to grace the show and meet Mikko in person); Kamp Kawayan has Isabela Vinzon, who sang a convincing rendition of “Feeling Good” (she’s the daughter of actor Roi Vinzon, who couldn’t contain his own excitement at two chairs turning for his little girl).

FamiLea has Patrick Lapid Corporal (of the Lapid Chicharon clan), who auditioned with “Fly Me to the Moon”; and, finally, in a very emotional encounter worthy of a moment on the big screen, Team Sharon got Zyra Peralta, who auditioned with one of the Megastar’s signature hits, the Willy Cruz-penned “Pangarap na Bituin.”

Sharon then bestowed Zyra with a sampaguita garland around her neck (a scene straight out of the movie, “Bituing Walang Ningning”).

Zyra revealed that the woman who has been taking care of her since she was 6 months old has cancer, and hoped that her being in the show would help in some way.

Sharon then launched into “Bituing Walang Ningning,” bringing tears to the eyes of just about everyone in the studio. For those who are Sharon fans, it’s undeniable that this was something very special. I felt very privileged to witness this moment.

To our first batch of teens, congratulations!

Loss of a musical genius

It seemed almost coincidental that the morning after our show aired, we received news of the passing of Willy Cruz, the songwriter who penned so many memorable OPM gems, including “Sana’y Wala nang Wakas,” “Never Ever Say Goodbye” and “Kahit Na.”

Rest in peace, Willy. We send your family our sincerest condolences.