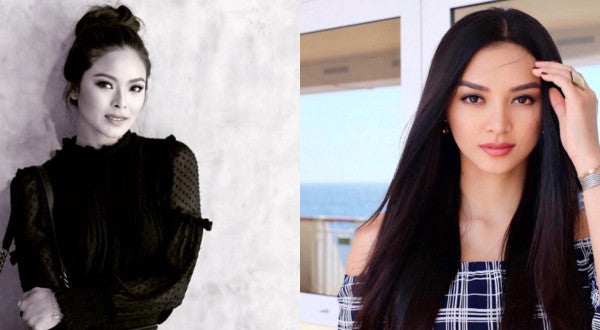 On Saturday, Gaffud posted a magazine cover of Versoza, who won Miss International 2016, on his Instagram page. But instead of praises for Versoza’s back-to-back projects and endorsements, several rambunctious fans lashed out at Gaffud for allegedly favoring Versoza over Medina, who finished sixth at the recent Miss Universe pageant. According to them, Versoza has landed in numerous TV and magazine gigs unlike Medina, who still has to spread her wings in the show-biz and modeling arena.

In another reply to an exasperated fan, Gaffud explained, “I have three movies for Maxine. Pero kino-convince ko pa siya kasi nahihiya siya. Ngayon lang ako nag-post about Kylie (But I am still convincing her because she is shy. It is only today that  I posted about Kylie). What’s the problem with that?” 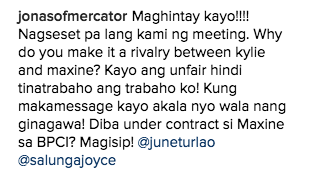 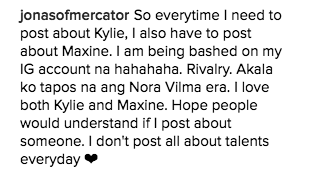 The feud reached such a point that Pia Wurtzbach, another exemplary pupil of Gaffud, shielded her mentor from his herd of bashers. In a lengthy comment on his post, the German-Filipino beauty queen said that Medina and Versoza were friends in real life and that Medina’s fans had no reason to be bitter about Versoza. 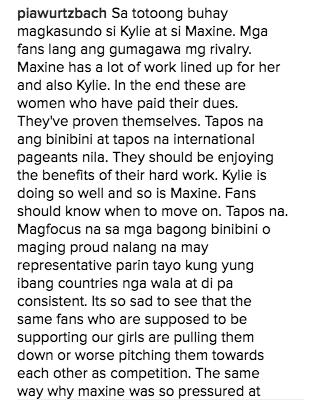 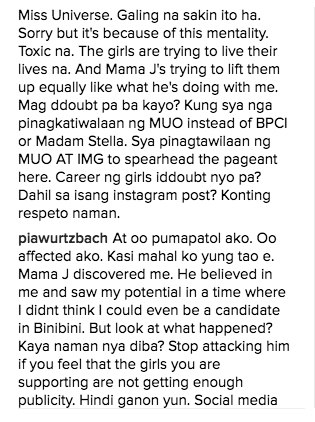 “Sa totoong buhay, magkasundo si Kylie at [si] Maxine. Mga fans lang ang gumagawa mg rivalry (In real life, Kylie and Maxine are in good terms. It’s only fans who are making the rivalry up). Maxine has a lot of work lined up for her and also Kylie. In the end, these are women who have paid their dues. They’ve proven themselves. Tapos na ang Binibini at tapos na international pageants nila (Binibining Pilipinas is over and so are their respective international pageants),” Wurtzbach said.

She also said that the Miss Universe Organization (MUO) had entrusted Gaffud and not other managers such as Binibining Pilipinas Charities Inc. (BCPI) or Madam Stella [Araneta] to advertise the pageant in the Philippines. “Its so sad to see that the same fans who are supposed to be supporting our girls are pulling them down or worse pitching them towards each other as competition. The same way why Maxine was so pressured at Miss Universe.”

Wurtzbach also reminded fans that it was Gaffud who discovered her potential to shine at the pageant spotlight. “He (Gaffud) believed in me and saw my potential at a time when I didn’t think I could even be a candidate in Binibining Pilipinas. But look at what happened…Stop attacking him if you feel that the girls you are supporting are not getting enough publicity. Social media is not a judge,” she said.  Gianna Francesca Catolico /ra

What’s in store for Jonas Gaffud and his fellow Aces after Pia Wurtzbach?