‘Beauty and the Beast’: Savvy combination of proven strengths and updated plus factors

Since we’ve loved musical films since childhood, we’re delighted to see that they’ve been making a high-kicking comeback of late.

“La La Land” got the tuneful party going, and now the latest version of “Beauty and the Beast” is adding to the fun and frolic with its deft and droll combination of live action and animation.

Let’s hope that the musical momentum is sustained for the rest of the season, with “Hello Again” and “The Carole King Musical” waiting in the wings.

“Beauty and the Beast’s” current success is due to its savvy combination of its proven strengths in terms of music and lyrics, its “redeeming” theme of redemptive and transformative love—and updated plus factors, like a darker yet more believable and “relatable” psychological context.

Also delightfully disarming is the new film’s supporting cast of “naturally animated” comedy sidekicks, like Lumiere the candelabra and Mrs. Potts the teapot, who come to antic life with great zest and feistiness.

Truth to tell, the old tale is in real need of updating and perking up, so filmmaker Bill Condon’s transformative gambits are most welcome, and come not a minute too soon.

Most productively persuasive of all is the inspired decision to cast Emma Watson as the new film’s female protagonist, Belle. Ever since she scored a direct hit on viewers’ affections in the “Harry Potter” films, Watson has established herself as a different kind of leading lady—a lovely, gamine yet offbeat girl who doesn’t need to follow traditional rules or templates to make her mark on the movie screen. 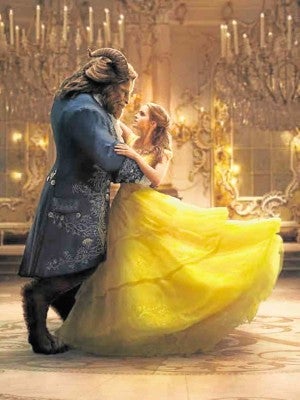 Dan Stevens and Emma Watson as the titular characters

Watson is no longer a child star, but has savvily retained this offbeat edge in her young-adult portrayals. She’s right as rain as Belle, because she embodies and vivifies her independent and audacious spirit, daring the monstrous Beast to do his worst, by opposing it with her very best!

To his credit, Dan Stevens as the tale’s resident prince-turned-beast doesn’t settle for being mere screen consort to the dominant Belle and the spirited actress who portrays her. Despite a heavy mask of prosthetics that limits his expressiveness, he is able to vivify the “trapped” prince’s pain and eventual remorse and love—a tough row for any actor to hoe.

Other standouts: Luke Evans as the film’s swaggering villain, Gaston, and gifted voice actors like Ian McKellen as Cogsworth the clock, Emma Thompson as Mrs. Potts, and Ewan McGregor as Lumiere.

On the debit side, the movie’s finale turns out to be less than smashing, because the predictable visualization is insufficiently creative, so it sputters instead of soars.

Still, the film has already scored enough plus points, especially with its vibrant and inventive production numbers, to make it a should-see movie for lovers of musicals savvily reenergized for a new film audience.

Read Next
13 ‘brains’ comprise NCCinema’s new movers and shakers
EDITORS' PICK
Comelec division junks petition to cancel Marcos COC for president
Acer starts the year off strong with the Aspire Vero National Geographic Edition
PH logs 37,070 more COVID-19 cases; over 33K others recover
‘Not yet the end’: Lawyer says Marcos Jr’s DQ cases to take lengthy process
The best of bayside and city living at SMDC’s Sail Residences
Over 3 Million worth of prizes to be won at Smart Padala’s SENDali Manalo Promo!
MOST READ
NBI foils escape attempt of Kerwin Espinosa, two others
Marcos camp ‘extends hand of unity’ after COC cancellation bid is thrown out
Wendell Ramos finally gets to hold his newborn for the 1st time
No vaccine, no French Open for Djokovic, says French Sports ministry
Don't miss out on the latest news and information.

TAGS: Beauty and the Beast