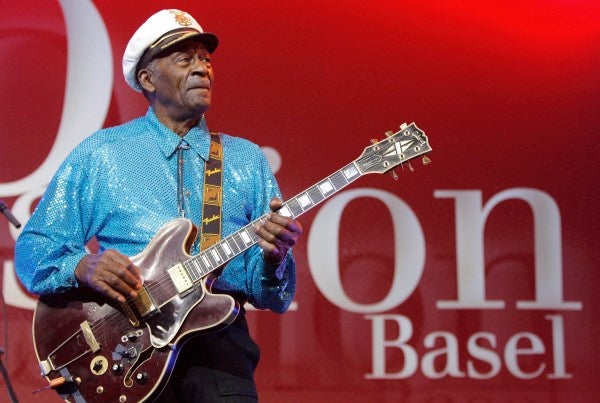 FILE – In this Nov. 13, 2007 file photo, legendary U.S. musician Chuck Berry performs on stage at the Avo Session in Basel, Switzerland. Berry, rock ‘n’ roll’s founding guitar hero and storyteller who defined the music’s joy and rebellion in such classics as “Johnny B. Goode,” ”Sweet Little Sixteen” and “Roll Over Beethoven,” died Saturday, March 18, 2017, at his home west of St. Louis. He was 90. (Peter Klaunzer/Keystone via AP, File)

The death on Saturday of legendary rocker Chuck Berry, aged 90, drew emotional tributes from fellow musicians and other celebrities who praised him as a rock ‘n’ roll trailblazer.

– Bruce Springsteen: “Chuck Berry was rock’s greatest practitioner, guitarist, and the greatest pure rock ‘n’ roll writer who ever lived. This is a tremendous loss of a giant for the ages.”

– Brian Wilson: “I am so sad to hear about Chuck Berry passing—a big inspiration! He will be missed by everyone who loves Rock ‘n’ Roll. Love & Mercy.”

– Lenny Kravitz: “Hail Hail Chuck Berry!!! None of us would have been here without you. Rock on brother!”

– Rod Stewart: “It started with Chuck Berry. He inspired us all. The 1st album I bought was Chuck’s ‘Live at the Tivoli’ and I was never the same.”

“Chuck Berry was not only a brilliant guitarist, singer and performer, but most importantly, he was a master craftsman as a songwriter. 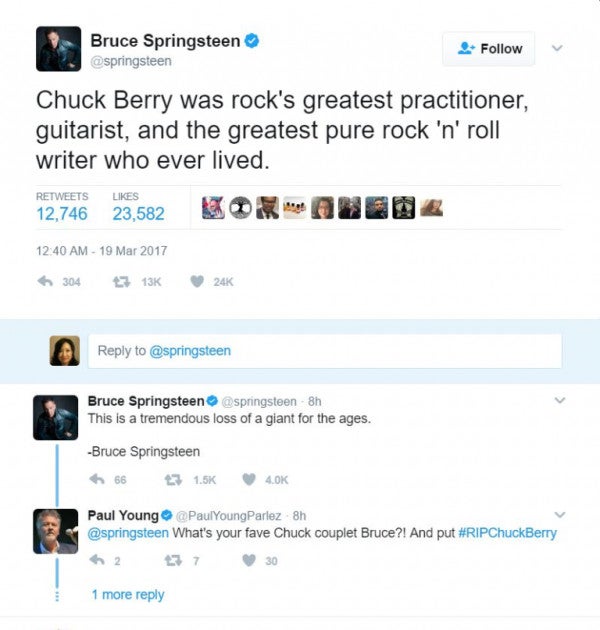 – Mick Jagger: “I am so sad to hear of Chuck Berry’s passing. I want to thank him for all the inspirational music he gave to us.

“He lit up our teenage years, and blew life into our dreams of being musicians and performers.

“His lyrics shone above others & threw a strange light on the American dream. Chuck you were amazing & your music is engraved inside us forever.”

– Ronnie Wood: “So sad—with the passing of Chuck Berry comes the end of an era. He was one of the best and my inspiration, a true character indeed.”

– Keith Richards: “One of my big lights has gone out.”

– Arnold Schwarzenegger: “When I was 10 years old and I dreamed every night of moving to America, Chuck Berry played the soundtrack. He rocked the world. RIP.”