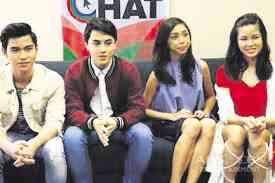 Even before the “Pinoy Big Brother’s” finals last March 5, we intuited that MayMay Entrata would emerge as this year’s winner. Some past editions
of the popular talent search were our “pegs” for that burst  of prescience.

Yes, the tilt has a penchant for discovering lookers like Kim Chiu and Sam Milby, but it also dotes on ditzy comediennes like Melai Cantiveros, who topped PBB some years ago.

MayMay is every bit as daft and dizzy as Melai, so we figured that she could again be the popular choice. After all, the tilt’s winner is decided by viewer votes, and TV’s masa audience sometimes delights in supporting bets who look like and thus “represent” them and are a lot of “spontaneous” fun!

We put “spontaneous” in quotes, because on TV, what comes off as natural and off the cuff is really a savvy confection and concoction cleverly intended to delight and disarm.

When the votes were finally revealed, MayMay was a clear audience favorite, but some lookers also garnered fanatic support that should serve
them well in their own incipient careers.

Our personal best bet for stardom was Edward Barber, who was as cute and boy-next-door as can be. The show’s acting tests also revealed that he was a natural performer capable of feeling and expressing emotions believably and empathetically, so he should go far.

In fact, guest director and mentor, Rory Quintos, was so impressed with Edward that she predicted that, if he lived up to expectations, he could emerge as the local movie world’s next big star. That’ll take a whole lot of dreaming and doing, of course, but it could happen!

Also promising is female finalist Kisses Delavin whose unusual name is a playful invitation to osculation that prospective fans would love to oblige.

For his part, finalist Tanner Mata comes across as a young-adult version of Edward and should similarly do well in boy-next-door roles.

As for big winner MayMay, her natural ebullience and spontaneity should be put to good use in comedy projects, and she could also end up cohosting youth-oriented shows.

However, she should avoid the pitfalls that have slowed down Melai’s ascent to the top: She has been too spontaneous and mali-mali, banking on it rather than on more reliably productive performing skills.

On her current daily show, “Magandang Buhay,” for instance, she pushes her “funny errors in English” shtick too hard, resulting in knee-jerk “humor” that isn’t all that risible.

Yes, it’s sometimes fun to fumble and fail, but ending up too often with egg on the face isn’t a hearty hoot, either.

So, MayMay should occasionally go spontaneously loka and gaga to dare the comedy imps to do their best.

But, she should also get a good foundation in professional comedy, so when the ditzy gambits fail, she can still generate laughs instead of groans.

Finally, since MayMay comes from the south, she can explore the possibilities of regional and Visayan comedy more formally, which would help make her even more unique.

Read Next
Khalil steps out of his comfort zone in gay-themed thriller
EDITORS' PICK
SMDC’s Style Residences: A real estate investment that will always be on-trend
DOTr has tip to convince ‘no vax, no ride’ enforcers
BBC StoryWorks and TECNO make short film about inclusive mobile camera innovations bringing people together
Robredo bares economic priorities under her presidency
NBI nabs 5 in hacking of 700 bank accounts
Start the year right with sustainable oral hygiene with SPLAT’s eco-friendly natural toothpastes
MOST READ
Marcos a no-show in TV interview of top presidential bets
Who’s victim, villain? Lines blur in viral ‘mango theft’ case
Pro-Robredo group warns CamSur mayors
Vendor in viral video says she used to be a Duterte fan, but not anymore
Don't miss out on the latest news and information.