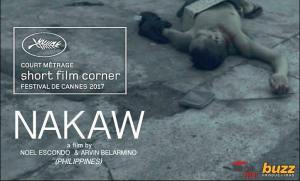 Another Filipino short film tackling pressing issues has made it to one of the world’s most prestigious film festivals, Festival de Cannes 2017.

“Nakaw” (Steal) is a crime-drama-thriller film about a boy who triggered a series of life-changing events when he stole an old woman’s purse.

As of March 3, the film has been officially selected for the festival’s Short Film Corner. It has officially premiered during the Instituto Cervantes de Manila’s Pelikula: 15th Spanish Film Festival, and set to be showcased along with different short films from around the world.

The movie is the first film collaboration of directors Arvin Belarmino and Noel Escondo. It will be screened from May 22 to 28, 2017 at the French Riviera’s famed film festival.