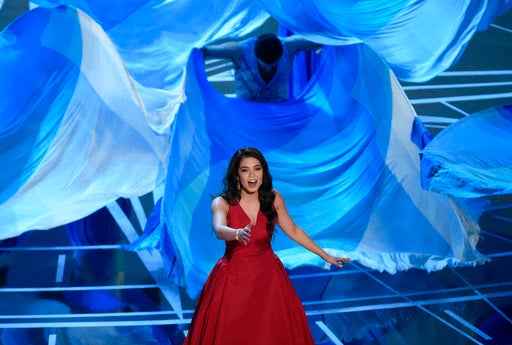 Auli’i Cravalho performs songs from best original song nominee “How Far I’ll Go” from “Moana” at the Oscars on Sunday, Feb. 26, 2017, at the Dolby Theatre in Los Angeles. (Photo by Chris Pizzello/Invision/AP)

Auli’i Cravalho, the teen whose celestial voice animated the title character in “Moana,” struck a gig as another protagonist, this time in a TV series.

After stunning the Oscars audience last Sunday with Lin-Manuel Miranda’s “How Far I’ll Go,” Cravalho was handpicked to star in NBC’s “Drama High.”

According to Deadline, “Drama High” is based on the life of high school drama teacher Lou Volpe, written by his former student Michael Sokolove. A dedicated teacher in his town, Volpe intensely trains middle-class students into talented and extraordinary performers. Cravalho, 16, will take on the role of Lilette, a young lady who aspires to become a singer and actress.

Jason Katims will serve as the series’ executive producer together with producers Flody Suarez and Jeffrey Seller.

READ: ‘Moana’ a Disney hit but portrayal irks the Pacific

Out of the thousands of aspirants who auditioned for the Disney role last year, the Hawaiian native was selected to lend her voice with Dwayne “The Rock” Johnson, who portrayed the Pacific demigod Maui. The story follows Moana, a chieftain’s daughter, and her simple quest to find Maui, after a blight strikes her island, in the hope of saving her people.

Read Next
Beatty urges academy president to clarify Oscars fiasco
EDITORS' PICK
DOH: Too early to say COVID-19 cases are declining
Over 3 Million worth of prizes to be won at Smart Padala’s SENDali Manalo Promo!
Gov’t rolls out COVID-19 vaccination in select pharmacies on Jan. 20 to 21
COVID-19 cases in City of Manila are decreasing, says OCTA
The best of bayside and city living at SMDC’s Sail Residences
Acer starts the year off strong with the Aspire Vero National Geographic Edition
MOST READ
Comelec junks petition to scrap Bongbong Marcos COC
In Batanes, octogenarian dies of COVID-19
Marcos Jr. visits Cebu, stands as ‘ninong’ to mayor’s son
When to get boosters after positive COVID test
Don't miss out on the latest news and information.