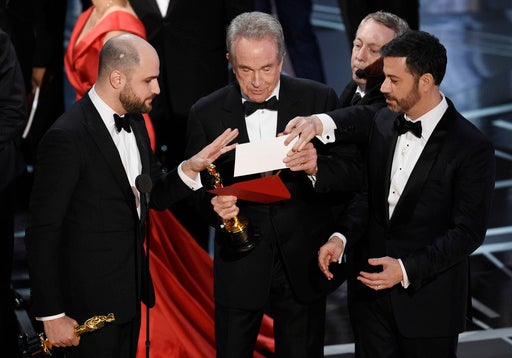 Beatty released a statement Tuesday to The Associated Press in which he declined to comment further on the debacle that led to him and co-presenter Faye Dunaway mistakenly reading “La La Land” as best picture winner rather than “Moonlight.” Instead, he urged the academy to answer questions.

“I feel it would be more appropriate for the president of the Academy, Cheryl Boone Isaacs, to publicly clarify what happened as soon as possible,” said Beatty.

READ: A snafu for the ages caps Oscars night

Since Sunday’s broadcast, the academy has largely left the explaining to PwC, the accounting firm that has taken the blame for the “La La Land” mistakenly being read as the best picture winner by Beatty and Faye Dunaway. PwC, which is in charge of tabulating the winners, has said partner Brian Cullinan mistakenly handed them the wrong envelope.

The film academy didn’t release a statement of its own until late Monday.

“We deeply regret the mistakes that were made during the presentation of the best picture category during last night’s Oscar ceremony,” it read. “We apologize to the entire cast and crew of ‘La La Land’ and ‘Moonlight’ whose experience was profoundly altered by this error. We salute the tremendous grace they displayed under the circumstances. To all involved — including our presenters Warren Beatty and Faye Dunaway, the filmmakers, and our fans watching worldwide — we apologize.”

On Monday, the academy said it has spent Sunday night and the following day “investigating the circumstances” and “will determine what actions are appropriate going forward.”

Others were coming to Beatty’s defense, including his older sister, Shirley MacLaine.

“They have to get their act together,” MacLaine said during an interview with the AP for her upcoming film, “The Last Word.” ”I thought it was just really, really terrible. I couldn’t imagine what he must have been feeling. I’m still basically processing it because it was in front of so many people.”

Neither PwC or the academy has commented on whether Cullinan’s use of social media was a factor in the error. The PwC partner tweeted a behind-the-scenes photo of best-actress winner Emma Stone moments before the best picture announcement. The tweet was later deleted.

As per protocol, Cullinan and PwC colleague Martha Ruiz toted briefcases to the awards via the red carpet, each holding an identical set of envelopes for the show’s 24 categories. During the telecast, the accountants were stationed in the Dolby Theatre wings, one stage left and one stage right, to give presenters their category’s envelope before they went on stage.

Most presenters entered stage right, where Cullinan was posted and where he handed Beatty and Dunaway the errant envelope. Yet the previous award, best actress, had been presented by Leonardo DiCaprio, who entered stage left and received the envelope from Ruiz. That left a duplicate, unopened envelope for best actress at stage right.