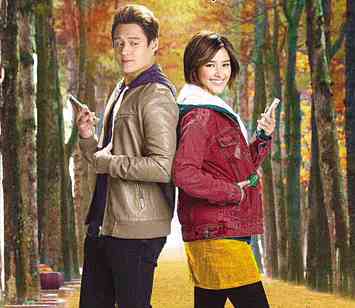 Enrique Gil (left) and Liza Soberano in “My Ex and Whys”

Old habits die hard. So, during our recent work break and trip to New York, we would begin or cap off our day with a movie at the 25-screen AMC cinema complex on 42nd st. in the Times Square area.

Imagine our pleasant surprise when, during our movie-going stroll last Feb. 17, we saw AMC’s box-office monitor flash Enrique Gil and Liza Soberano’s latest rom-com, “My Ex and Whys,” which had five screenings that day. For the film’s 10:50 a.m. show time, the theater wasn’t full, but viewer turnout for the film was nothing to scoff at, considering it was a Friday-morning screening during winter.

The production hews close to the Pinoy rom-com’s oft-repeated and over-utilized formula—about couples who are stuck in an on-again, off-again relationship until they iron out their differences and ride happily into the sunset—and captures both the real-time urgency and disposable nature of social media and the instant-gratification quick fixes it offers.

Unfortunately, it doesn’t offer anything new or thematically insightful. It entertains, all right—but, Happily Ever Afters are par for the course in mainstream cinema’s fascination for anything escapist.

The wired-to-please film is snappily paced, winsomely staged and beautifully photographed (especially the scenes on picturesque Nami island in South Korea), with wacky Ryan Bang putting his loony sense of humor (and twisted tongue) to good use.

What about the lead stars’ performances? There’s nothing to crow about in pudgy heartthrob Enrique’s portrayal, but director Cathy Garcia-Molina coaxes a “game-changing” turn from Liza Soberano.
The lovely actress wears her proud but fragile heart on her sleeve in her impassioned portrayal of Callista Ferrer, a blogger who riles and warns women about the polygamous nature of men.

Cali’s immediate concern: She has a difficult time forgiving and forgetting former squeeze Gio Martinez (Gil) who, as it turns out, is still in love with her. But Cali isn’t convinced because, as they say, once bitten, twice shy. 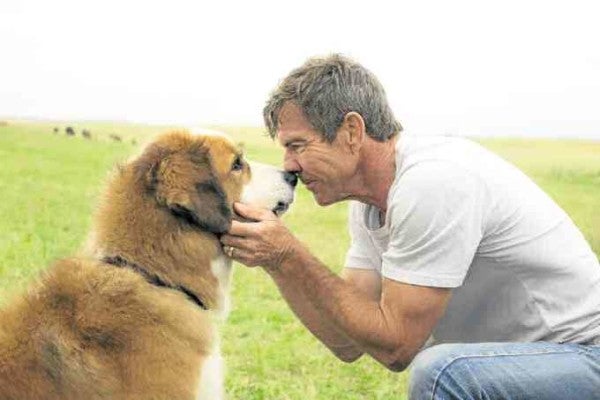 Dennis Quaid in “A Dog’s Purpose”

It’s also hard to dismiss the “viewability” of Lasse Hallstrom’s “A Dog’s Purpose,” because the film mirrors man’s relationship with his devoted canine pals.

The movie’s 56-year tale strings together snippets of episodes from the “extended” life of its furry Golden Retriever protagonist, Bailey, and the different owners he interacts with every time he gets reincarnated.

Yes, reincarnated. Don’t ask us how that happens, because even Bailey doesn’t have a comprehensible explanation for it. But the film cleverly uses magic realism to entertain and educate viewers about the indispensability of man’s four-legged best friend in his day-to-day existence.
In the movie (which begins its theatrical run in the Philippines on March 1), Bailey eagerly plays catch to entertain Ethan (portrayed by KJ Apa and, later, Dennis Quaid as an adult), who’s nursing not just a broken leg but a broken heart, as well.

Then, he is reborn as a German Shepherd, a criminal- and contraband-sniffing female police dog, who serves her doting master with all her heart and saves him from imminent harm.

Later, as a Pembroke Welsh Corgi, Bailey forges a strong bond with lonely college student Maya and helps her find her One True Love.
When he “moves on” to his next master, however, Bailey finds himself in the care of an abusive and uncaring couple who lives in a mobile home. Will Bailey fade away as a battered and hungry pup in what seems like his “final incarnation?”

The movie’s 76-year-old Swedish director has his share of Oscar citations (“The Cider House Rules,” “My Life as a Dog”), but his latest film is nowhere near as cohesive or thematically pertinent as, say, Damien Chazelle’s “La La Land,” Barry Jenkins’ “Moonlight,” Garth Davis’ “Lion” and Theodore Melfi’s “Hidden Figures”—our top Oscar bets this year.

In fact, the exposition of “A Dog’s Purpose” leaves viewers with more questions than answers, but it’s the kind of film we don’t mind watching, because it dispenses good advice and delivers hard-earned lessons for young moviegoers to mull over.

Moreover, we’ve learned to manage our expectations when we watch heart-warming and feel-good films like this because they serve their purpose—and remind us of the kind of world we can aspire for.

Yes, Mr. Hallstrom. If man isn’t capable of showing compassion for the four-legged furballs “who” smother him with unconditional love and affection, how can we expect him to truly care for his fellowmen, who sometimes treat him with disregard and cynicism?