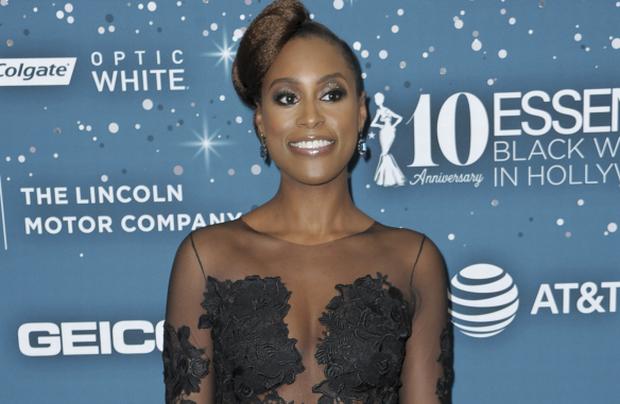 Essence magazine recognized these four young entertainers Thursday at its 10th anniversary Black Women in Hollywood gala, which is set to air as a special on the Oprah Winfrey Network on March 5.

“Stories written, directed, produced and acted by black women are necessary,” Common said as he and actor Kofi Siriboe opened the program at the Beverly Wilshire Hotel.

“This event is a reminder that we are here,” host Gabrielle Union said. “Regardless of whether or not anyone sees us.”

The need to be seen, heard and valued was a theme of the evening, as pioneering artists such as Debbie Allen and Viola Davis lauded the next generation of storytellers, who in turn thanked them for paving the way.

Allen described Rae as “an OBG: an original black girl.” The 32-year-old writer, director and star of HBO’s “Insecure” listed Allen among the many black women who inspired her. Rae said the choreographer, director and producer has “been goals since I was a child, then I realized I can’t dance so I was satisfied just being a fan.”

Tracee Ellis Ross said she and Shahidi, her TV daughter on “black-ish,” are “kindred souls from different eras.”

Shahidi said she sometimes wonders what she’s doing “in beautiful designer clothes while the world is reeling backward.”

“What I am I doing to contribute to the world around me?” she said. “I’m fortunate because you all have taught me by example what the role of the arts is: to disrupt, to remold and to create.”

Past Essence honorees Shonda Rhimes and Diahann Carroll were among the guests Thursday. Other past recipients include Davis, Allen, Ross and Union, along with Oprah Winfrey, Halle Berry, Cicely Tyson and Ava DuVernay, who appears on the cover of the magazine’s March issue.

Pharrell Williams, who’s up for an Oscar as a producer of “Hidden Figures,” presented an award to Monae, a star of that film and “Moonlight.” He described her as “the definition of a pluralist.”

Monae spoke passionately about the autonomy and agency of black women.

“The world must continue to know that we are not your expectations,” the 31-year-old entertainer said. “We have been the backbones of communities from the ghettos to Silicon Valley. We’re not monolithic. We are multidimensional. And we have a right to have our stories told.”

She noted that “Hidden Figures,” which stars three black women, has brought it more than $140 million so far.

Davis introduced King, her co-star on “How to Get Away With Murder,” by praising the honesty and openness she brings to her performances.

The 32-year-old actress responded with a poetic speech that moved several in the room, including Union, to tears. She talked about struggling to overcome an inner critic that tells her she’s unworthy and doesn’t belong.

“But in order for me to survive in this industry and in this world, in order for me to thrive, I have to stop believing that the root of my talent is a tree growing in someone else’s yard, as if the fruit it bears doesn’t belong to me,” she said. “We are living in a world where we watch our culture being consumed and are left starving for ourselves, and I don’t want to be hungry anymore.” –Sandy Cohen