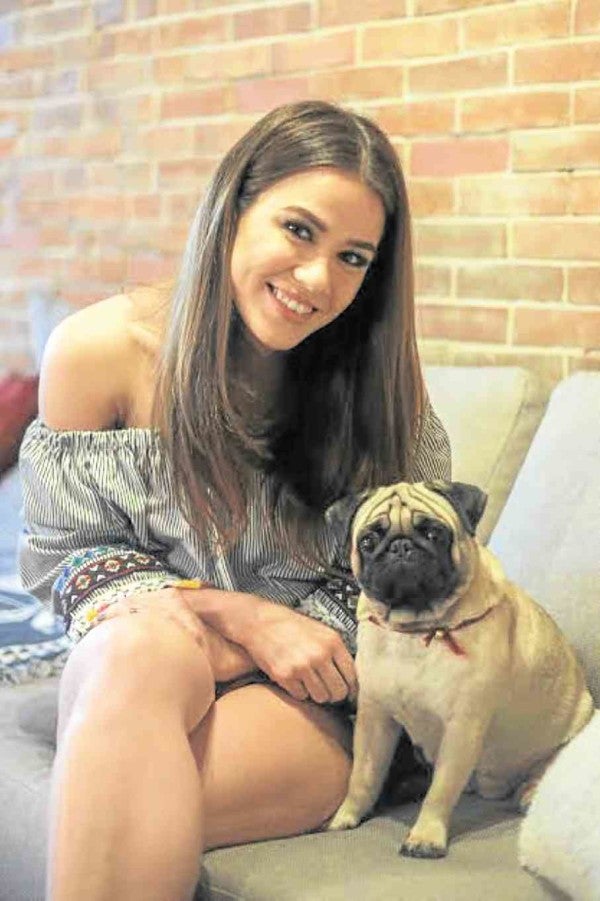 The actress with her beloved pug Unna

Actress Valeen Montenegro believes that she can learn much from taking care of her pet pug Unna (pronounced as “unya”).

“First, it teaches responsibility—she depends on me to feed and bathe her,” said Valeen. “I feel that dogs speak to us through their actions. It’s weird … [to] know they are loving you back. I just know that Unna is thankful to me for taking care of her. ”
The Inquirer recently visited her and Unna at M Studio in Paseo de Magallanes, Makati City, the fitness center she co-owns with boyfriend Selu Lozano.

“Dogs live with you for a certain number of years. They become a part of you, but they eventually … [die ahead of] you. That’s the hard part—you learn to grieve,” said Valeen, recalling the deaths of two other dogs, Tequila and Babu.

Valeen got Unna from her sister Denise’s officemate when the pug was already a year old. Her name came from the Filipino word “una” (first), because she is the eldest in a litter of four pups.

“Having a dog also improves one’s social skills because they can be a good ‘ice breaker.’ I plan to create a pug community that will gather here at the studio every Sunday to discuss everything about how to raise pugs,” Valeen said.
“Selu loves Unna, too. It’s funny because we play mom and dad to her. I sometimes reprimand Selu when I see him petting Unna after I had just scolded her for peeing somewhere she wasn’t supposed to.
“Once, when we were not talking to each other in the car after an argument, we heard Unna snoring loudly at the back seat, so we laughed! We realized how silly our argument was and decided to let it go.” 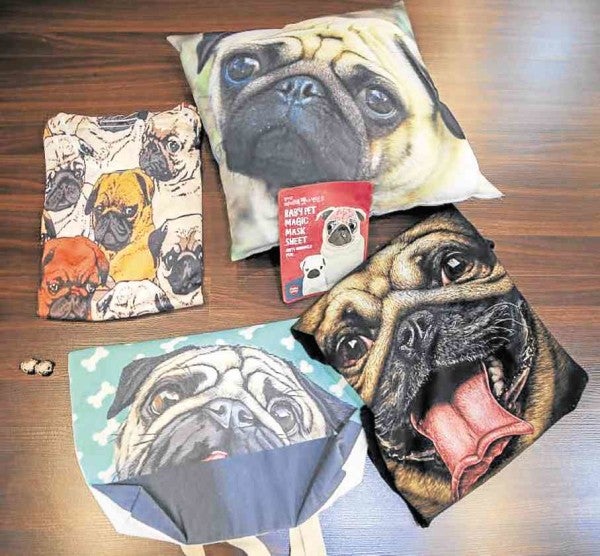 Valeen’s collection of items with pugs.

“I’m obsessed with anything pug!” said Valeen, showing us the black T-shirt that Selu bought for her last year. “It has a huge pug’s face printed on it. He saw this at a garage sale while he was running. It’s so cute. I use it as a sleeping dress.”

She also showed us another pug shirt from her best friend. “She just saw this and immediately thought of me,” she said.

Valeen bought a pair of earrings, also with a pug design, three years before she got Unna. “It was meant to be for me,” she declared. She also bought a tote bag, which matches the iPhone case that fellow GMA 7 talent Chariz Solomon got for her.

One thoughtful chef working at her Unna Cafe, also at Paseo de Magallanes, gifted her with a pug facial mask pack.

“Isn’t it cute? It promises to remove wrinkles—[it’s funny] that pugs have wrinkled skin. I don’t want to use this yet. I find it too cute.”

There’s also the throw pillow that her sister gave her. “The pug here is Unna’s lookalike. I actually thought my Ate had a photo of Unna printed for this,” Valeen said.
FHM memento
In July 2015, Valeen posed for the cover of the men’s magazine FHM. The production team gave her pictures that served as pegs for her poses.

“I chose from 10 photos. I asked if they could have me in red, also in black and white. I wanted something that made me look mysterious, strong and sexy. I loved the cover.”

She then showed a sketch of her FHM cover that her sister gave her as a birthday gift. “Her officemate did this. He’s good. He also likes sketching Marian (Rivera, actress). I like this because the sketch really looks like me.” 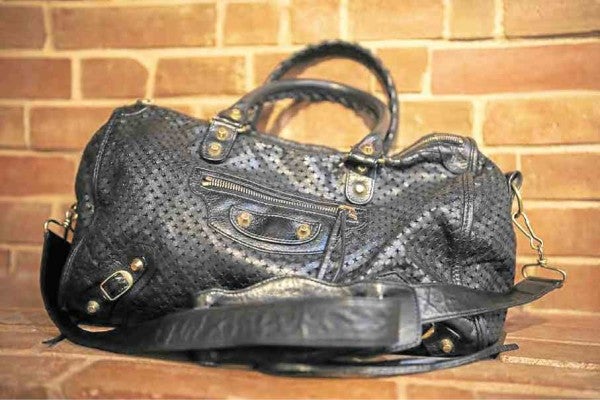 The Balenciaga bag that matches her personality

Her favorite is the black perforated lambskin leather motorcycle bag from Balenciaga she bought from comedienne Tuesday Vargas.

“I feel that if I were a bag, this is how I’d look. This is my personality. It’s something simple, but it’s a special edition. I’m common but then, not so,” she explained. “I’ve had this for five years, and it still looks perfect. It goes with any outfit.”

Valeen loves her Fujifilm Instax Share printer not only because it’s a Christmas gift from Selu, but also because she has been into photography since her college days.
“From your phone, you can have any photo printed. It’s awesome. Selu got me this because he knew I also love scrapbooking,” she said.

Her sister gave her a GoPro action camera, too. “She and my friends like me to take their photos. I’m the type of friend who will capture the best photo for your Facebook profile,” she beamed.

Valeen has a boxful of letters, mostly from her supporters and fellow actors. “I keep them because it’s nice to reread them when I’m feeling down, especially those from members of my fans club, Valeenation. You don’t give these people anything, so you don’t know why they like you so much,” she observed.

“They are the sweetest!” she said. “Ms Snooky and I got close while doing the series, ‘Poor Señorita.’ She kept telling me that I’m different from the rest, that I don’t have to be scared … that I’m different. She said it at a time when I really needed to hear it. For my birthday, she gave me this card, along with a bottle of perfume,” said Valeen, reaching for the box of Lanvin Eclat. 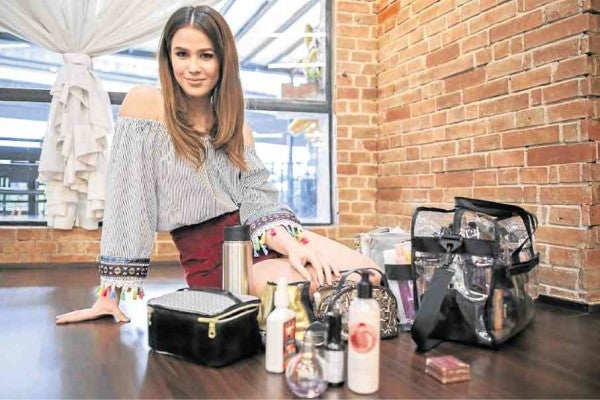 “I love coconut in this perfume for some reason,” said Valeen of the Lanvin bottle. “I like cranberry, too, especially in this lotion with shimmer. I like fruity scents, just to balance things out.”

Valeen’s “must haves” are the bottle of argan oil she uses to keep her hair shiny and bouncy; the icy eye drops she got from Japan to remove the redness in her eyes due to allergic reaction to makeup; and her Messy Bessy sports spritzer that deodorizes her gym bag.

Most of what Valeen knows about makeup, she learned from her sister, who is both a makeup artist and a baker.
For daily use, the actress prefers brands like Benefit (for cheek contouring), Urban Decay (for eyebrows), Face Shop (for cheek color) and Biore (for makeup removal).

She added: “If you have a bottle of cheek/lip tint, an eyelash curler, a tube of mascara and an eyebrow pencil, then you’re good. For makeup, make sure you’re not allergic to it. You first test it by buying one product and using it for a week. If you’re not satisfied, move on to another brand.” 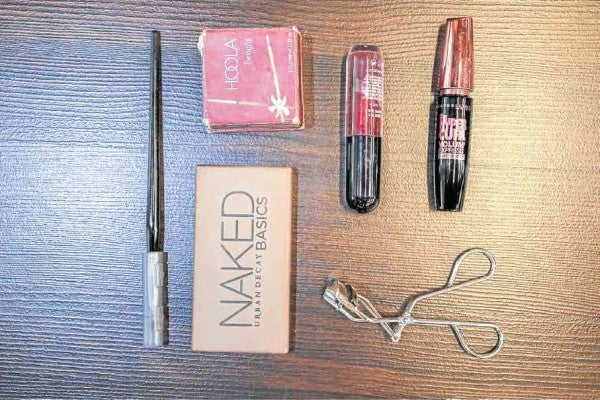 Her foolproof tools to achieve the “no-makeup look”