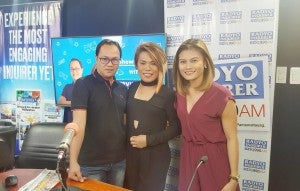 He may be known for his on-point diva versions of the Filipino classic lullaby “Tatlong Bibe”, but comedian Tammy Brown’s chops at impersonation covers more personalities than expected.

In his February 22 guesting on Inquirer ShowbizLive, Brown impressed not only the viewers and listeners, but the show’s hosts as well.

He did “Tatlong Bibe” a la Vina Morales, Jaya and Lani Misalucha, earning the praise of netizens. But he is most noted for his Regine Velasquez version of the rhyme.

He says working with Regine Velasquez via GMA’s “Full House Tonight” has been a fulfillment of his childhood dream.

(I want to cry out of giddiness. I feel like I’m in heaven. As a child, I learned to sing her songs. She was the only singer-actress I knew. We did not even have a TV. We were poor.)

Born Christopher Gonzales, he says he’s even luckier when he got to bond with the songbird through a dinner that the latter hosted for the cast of “Full House Tonight”, which also stars Brown.

(She cooks very well and she acts gay. She is definitely our queen.)

In his early days, he says he usually sang Velasquez’ hits like “On the Wings of Love” and “Kailangan ko’y Ikaw” which he sampled on the show.

Besides his classic diva enactments, another surefire hit act he does is his set of impersonations of Angel Locsin, Dionisia Pacquiao and Manny Pacquiao, all of which he also did on ShowbizLive.

Nonetheless, Tammy Brown admits that there are a lot of challenges involved in being a stand-up comedian, and he reminded those who want to venture into this field that it’s not easy. He also gave basic tips on the craft.

(You have to watch and take note of how the person you want to impersonate moves and talks. You have to know what’s happening in his or her life.)

Of all the comedians he’s known and worked with, he says he looks up to Pooh the most.

Inquirer ShowbizLive airs every Wednesday, 8 p.m. on Inquirer.net Facebook, Youtube and Periscope. It is also broadcast live on Inquirer Bandera Facebook, RadyoInquirer 990AM and channel 16 or 18 via TV Plus.