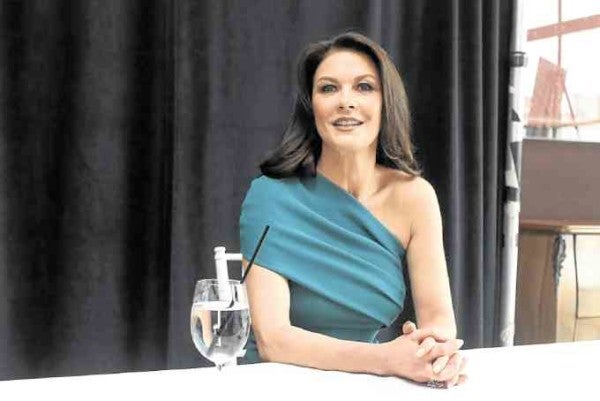 LOS ANGELES—It’s been a while since we last interviewed Catherine Zeta-Jones. Talking to her again recently in New York made us remember what a delightful interviewee she is—very spirited, charming, game, almost campy. She likes to exaggerate certain words for wicked, seductive or amusing emphasis.

Although she usually does not dress up and put on makeup on Sundays, the Welsh beauty showed up at our interview at  Crosby Street Hotel. She looked gorgeous, slim and fit in a green Haney one-shoulder dress.

The Oscar-winning actress for “Chicago” could fit right in the era when Hollywood had real glamour and style. That is why she’s perfect as Olivia de Havilland in Ryan Murphy’s wickedly fun “Feud: Bette and Joan.” As Olivia, Catherine serves as the narrator in the eight-episode FX series on the professional and personal rivalry between Bette Davis (Susan Sarandon) and Joan Crawford (Jessica Lange).

Catherine has the pleasure of hearing anecdotes about Olivia, Bette and Joan from a man who personally knew these colorful actresses, Kirk Douglas, whom she simply calls “my father-in-law,” and his wife for 60-plus years, Anne.

The actress also opened up about her relationship with Michael, with whom she reconciled in 2014 after both of them went through difficult times coping with illnesses. He battled tongue cancer while she struggled with bipolar II disorder.

The 47-year-old beamed as she talked about happy times these days with Michael and their two kids who aspire to be actors, too—Dylan, 16, and Carys, 13.

Catherine also enthused about “The Godmother,” her passion project in which she will star as Griselda Blanco, also known as the Cocaine Godmother—reportedly the deadliest, wealthiest woman to lead a Colombian drug cartel. 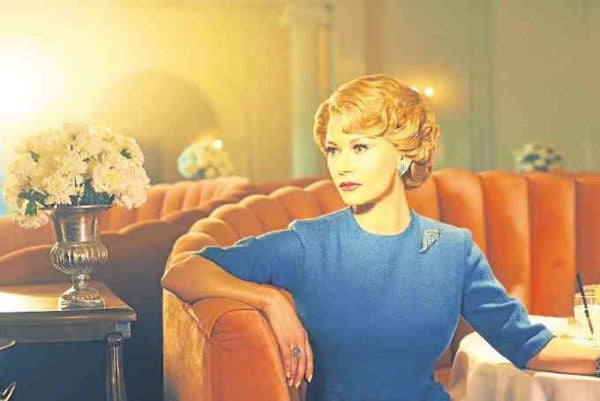 Nowadays, you rarely hear about feuds in Hollywood unlike in the old days.  Back in those days, it was a stable. People knew that a script was coming out and the favorite of the day was bound to play it—Bette or Joan wanted it or whoever wanted it.

There was an inherent competition in which these women who were part of the same stable wanted to get the best jockey. Whereas today, there are actresses I only ever meet at the Golden Globes (laughs).

Is there something sexy about a feud? There is something that is so salacious about a feud that we all love it. Even if people don’t want to strangle each other, we hope that they do (laughs).

Wasn’t there a feud between Olivia and her sister, the late Joan Fontaine? Yeah, they had a big feud. Both are Oscar winners. I never met Olivia. I’ll just give you a little story. I was hoping to meet her because she turned 100 last June, six months before my father-in-law did. When I knew I was playing her, I wanted to meet her. She is living in France.

When you look back on her life, Olivia was very strong. She went up against the studio system for the very reason that she was being pitted against other people and she wanted to do a movie in a different studio.

What delicious dish did you learn about these broads, as you call them—Bette and Joan—in doing this show? I never knew that Joan went off to try to find a way of being very present one time at the Oscars (1963, when Bette was a best actress nominee). She went around all the other Oscar nominees (Anne Bancroft, Katharine Hepburn, Geraldine Page and Lee Remick) and offered her services, saying, if a crisis happens, Joanie will be there for you (laughs).

Ironically, Anne Bancroft agrees because she was working here on Broadway at that time. Anne Bancroft wins. Joan goes up and accepts the award and takes it as if it is hers.

Did Kirk tell you stories about Olivia and these stars? When I told Kirk I was playing Olivia, he took one look at me and went, “Ahh, Olivia! (laughs).” And he said nothing else. Anyway, he adored Olivia. He kept saying to me, “She was special, she was different— Olivia.”

My stepmother-in-law has a story about Bette. They were at Dean Martin’s house, a big pool party at night. As you know in LA, it gets a bit chilly at night. Anne was freezing and she had a little dress on.

Bette goes (she imitates Bette, raspy voice, accent and all), “For God’s sake, Kirk, stop being so f***ing cheap! Buy the girl a mink coat!” So, two days later, a box comes from Neiman Marcus with this big fur wrap. So, Bette is responsible for my mother-in-law having her first mink wrap.

Actors lead competitive lives, vying for the same parts and awards. How do you deal with competitiveness? Forget about the business—as a woman, I always feel that there is enough room for all of us. We have to hold each other up. But as an actress, I wouldn’t be here today if I didn’t have a competitive gene. I wouldn’t have made it.

I instill in my children a healthy competitiveness and that is an attitude.

Especially with women, you’ve got to get tough, baby.  Get out there. Do it. If they knock you back, you get up and you walk straight forward.

What’s the secret of your relationship with Michael Douglas?  I am very blessed.  First of all, I have a husband who listens and I am a wife who listens. We have come to a place in our lives where it couldn’t be better.

I am very blessed in that I have two vivacious, healthy children. I have a very healthy husband and a healthy mother.

Can you talk about your time off? I never thought that I had taken time off because I have been reading all the scripts and deciding whether I really want to do that. I want to work with good people, with great talent, in a great environment. I can’t go to Australia at the drop of a hat like I used to be able to before I was a mother or before I was a mother of children who are in school. They are very conscientious students who have after-school curriculums.

Do you go out and do things that you don’t necessarily have any passion for, just to be seen doing something, keeping yourself out there?  I was never that kind of person in the beginning. Historically, there comes a point in a woman of my age’s career in which the roles aren’t that exciting. You have to form them.

After I won the Tony, every musical wanted me to be in it. I said, if I go back to Broadway, I want to do a straight play.

This is a delicious new TV show. Describe the TV viewing environment in your home. I bought a new house that I fell in love with. My husband didn’t really want to move because he was happy where we were. So I said to him, “I have a treat for you.” In our TV room, I got him a really big Curved TV. He loves that TV as equally as he loves me (laughs).

Do you still sing?  Yes. On my bucket list is, I want to put together a show here at Joe’s Pub. Music is very important to me.