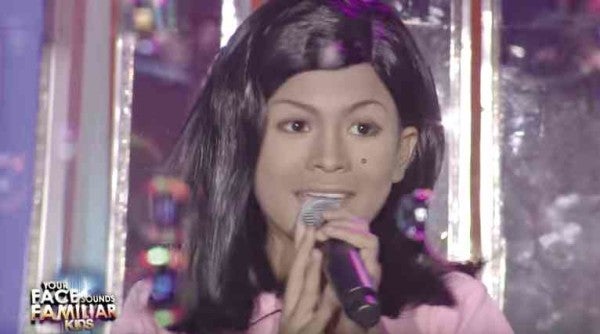 The kiddie impersonation tilt, “Your Face Sounds Familiar,” scored a big hit with its buena mano brainstorm to make Awra Briguela “do” a Mommy Dionisia Pacquiao satirical turn. After that inspired move, however, the show has been having a hard time coming up with “bull’s-eye” showstoppers, so here are a few unsolicited suggestions:

Seven-year-old Xia Vigor reminds viewers of the similarly pert and gifted screen moppet, Shirley Temple, so Xia should do a musical tribute to the most celebrated child performer of all time.

Shirley began her film career in 1953—at only 3 years old! She was loved to bits by millions of moviegoers because she was a total performer: acting, singing and dancing with equal verve and gusto.

Xia’s tribute to her should be a restaging of Shirley’s “signature” hit song, “On the Good Ship Lollipop.” This number requires some tap dancing, so if she manages to do some of that, her tribute should enhance her career, as well.

What about Alonzo Muhlach? His best bet is obvious: to pay tribute to his own dad and lookalike, Niño Muhlach, one of the most iconic child actors local entertainment has ever produced.

Like Shirley, Niño was only 3 years old when he first appeared on TV, as Ariel Ureta’s chitty-chatty kid sidekick on TV. Soon after that, he became a big-screen sensation, as well.

Since Alonzo is his dad’s mini-me, his impersonation should be a really “swak” depiction. It goes without saying that the song should have a strong comedic  touch to it.

Right after we recently suggested that Lyca Gairanod “do” her lookalike, Nora Aunor, on “YFSFK,” she obliged with a tribute to the Superstar—but it didn’t work wonders for her, due to lackluster staging. So, this next time around, she should impersonate—Sylvia La Torre!

They’re all homegrown stars, because we feel that local entertainers do best when they spoof or impersonate Pinoy singers. More pertinently, all of our suggested stars are distinct, unique and even idiosyncratic performers—so crisply colorful to impersonate.