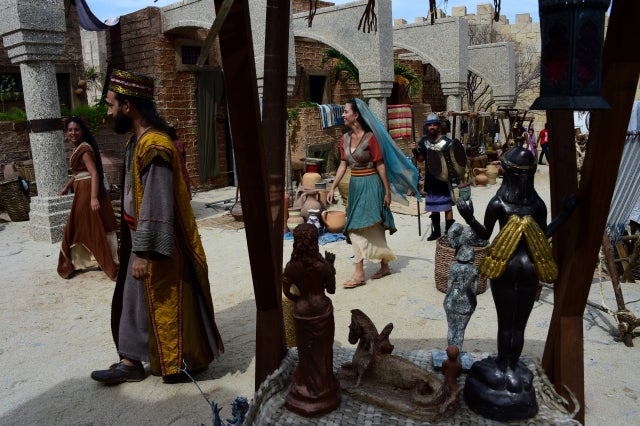 Actors walk on the set of “O Rico e Lazaro” (The Rich Man and Lazarus) soap opera at the studios of Record TV in Rio de Janeiro, Brazil on February 3, 2017. Nebuchadnezzar II is about to be crowned in a sumptuous Babylonian palace, and production assistants in Havaianas flip-flops are rushing to get a small army of extras into place. Welcome to the set of “The Rich Man and Lazarus,” the latest biblical telenovela from the media empire of one of Brazil’s largest Evangelical mega-churches. TASSO MARCELO / AFP

Nebuchadnezzar II is about to be crowned in a sumptuous Babylonian palace, and production assistants in Havaiana flip-flops are rushing to get a small army of extras into place.

Welcome to the set of “The Rich Man and Lazarus,” the latest biblical telenovela from the media empire of one of Brazil’s largest evangelical mega-churches.

Edir Macedo, the controversial founder of the Universal Church of the Kingdom of God, has already scored two prime-time hits with soap operas based on the Bible: “The Ten Commandments,” in 2015, and “The Promised Land,” currently on air.

Macedo is the owner of Brazil’s second-largest television network, TV Record, whose foray into telenovelas is reshaping prime-time in the giant South American country.

Telenovelas — or “novelas,” in Brazilian Portuguese — are a national obsession in Brazil, nearly on par with football.

They used to be strictly secular, with the dominant player, TV Globo — the country’s largest network — dealing with subjects such as gay couples and racial discrimination in its scripts.

But Macedo and TV Record saw an opening for a new kind of series in a country where evangelical Christianity is booming, steadily eroding the numbers of the world’s largest Catholic population.

Spending $230,000 per episode, the network has drawn viewers and advertisers with extravagant biblical sets, costumes and, in the case of “The Ten Commandments,” action filmed partly on location in Israel.

“In the 27 years I’ve been in this business, I’ve never seen a set like this. It’s a very bold project, and it will be a wonderful story,” said the director of “Lazarus,” Edgard Miranda.

“The Bible is a fantastic script.”

On a recent visit to the sprawling studios on the outskirts of Rio de Janeiro, AFP saw large Mesopotamian sphinxes and gold-tipped columns framing the palatial set where the ancient Babylonian king was about to be crowned.

TV Record has built an artificial river, a Babylonian temple and Jerusalem streets in its quest to create an authentic Old Testament feel.

The soaps’ scripts do not lack for romance and intrigue. But in between staple telenovela plot lines, characters preach the word of God.

“The stories deal with very current issues with a high level of quality,” said Miranda, a 44-year-old Rio native who cut his teeth at Globo.

But “TV Record’s greatest success has been bringing the whole family together in front of the television again,” he said.

It is a strategic shift for the network, whose nighttime programming originally featured pastors preaching to their flock.

Emboldened by their success, the network then went out on a limb and commissioned “The Ten Commandments,” Brazil’s first biblical telenovela.

It managed to beat Globo in the ratings several nights and sold the show to networks in some 20 countries around the world.

“Promised Land” achieved similar success, and TV Record is now hoping “Lazarus” will do the same.

“It teaches certain tenets of ethical behavior. People are tired of the aggression and ugliness of daily life,” said actor Cassius Scapin, who plays a villain on the show.

Evangelicals have grown from five percent of Brazil’s population in 1970 to nearly 25 percent in the 2010 census.

Evangelical denominations have capitalized on an extensive network of churches, deftly using TV, radio and social media to draw millions of Christians away from the Catholic Church.

In a country with millions of poor, evangelical churches typically teach a message of change for the better in this life and after — whereas the local Catholic church traditionally puts the accent on the afterlife.

The power of Macedo’s church is evident in Rio, where his nephew Marcelo Crivella, a former bishop, was recently elected mayor.

But Macedo’s rise has also been controversial.

Macedo, 71, was charged with fraud and money laundering in 2011 for allegedly buying jewelry, real estate, and cars with billions of dollars skimmed off his followers’ charitable donations.

He denies the accusations, which have done little to dent the popularity of his church.

But the evangelical boom is not the only reason for the success of biblical telenovelas, said TV critic Nilson Xavier.

“Whether or not their function is to indoctrinate viewers, Record definitely managed to create a differentiated, high-quality product that above all attracts advertisers,” he said.