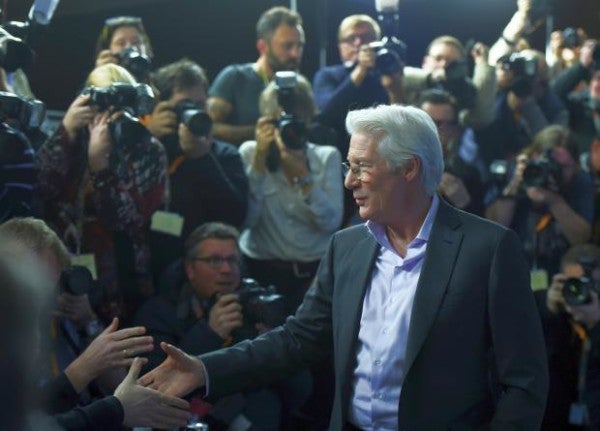 Actor Richard Gere arrives at the 67th International Berlin Film Festival for the premiere of the nominated film “The Dinner” in Berlin, Germany, Friday, Feb. 10, 2017. (Photo by MONIKA SKOLIMOWSKA/dpa via AP)

BERLIN — Richard Gere says US President Donald Trump lacks substance, likening him to a burger without the filling.

The actor, who’s in Berlin promoting his new film “The Dinner” about a politician facing tough personal and moral choices, says Trump “has pushed it to the limit.”

In an interview Friday with The Associated Press, Gere quoted the 1980s television commercial in which a fast-food chain customer asks “where’s the beef?” when handed a giant hamburger bun.

The star of films such as “Pretty Woman” and “An Officer and a Gentleman” later told an audience at the Berlin Film Festival that Trump had made people fear refugees by equating them with attackers.

Read Next
Cesar just being a concerned dad to Diego
EDITORS' PICK
Leveling up your ‘lutong bahay’ with the kitchen companion you never knew you needed
SM prepares for ‘safe malling’
Notice of 2020 regular meeting of stockholders June 18, 2020
LIST: What to expect in areas under GCQ, MGCQ
Drilon wants repeal of penal provisions in proposed Bayanihan extension law
DOTr bares 2 phases of public transport revival in GCQ areas
MOST READ
LIST: What to expect in areas under GCQ, MGCQ
Hong Kong loses US ‘special status’ — what next?
Duterte approves Metro Manila’s shift to GCQ starting June 1
Bocaue Mayor Joni Villanueva passes away, Sen. Villanueva confirms
Don't miss out on the latest news and information.