Colbert reaches a ratings milestone at start of Trump era 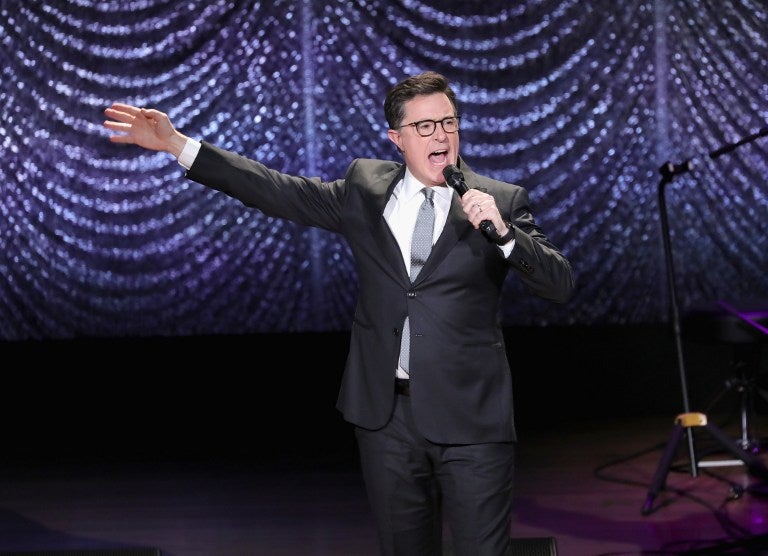 NEW YORK, United States — He may cringe at the thought, but is Stephen Colbert the late-night man for the Trump administration?

The margin was so small — 2.77 million average for CBS, 2.76 million for NBC — that CBS didn’t want to jinx its good fortune by making an executive available to talk about it on Tuesday. But it reflects a turnaround for the troubled show since former “CBS This Morning” executive Chris Licht was put in charge backstage and steered the show toward more topical content to match the times.

The “Late Show” won two of the five nights on which Colbert and Fallon went head-to-head last week, but it was enough to win the week. One night was Tuesday, when Colbert’s former Comedy Central pal Jon Stewart came by to offer an impersonation of President Trump.

The other win was Monday, Colbert’s first night back from a week’s vacation and his first show, he noted, in the Trump era. His monologue that night recorded 4 million views on YouTube, CBS said.

“You’ve got to give the guy credit,” Colbert said of the new president. “He gets a lot of stuff undone.”

It may be Colbert’s first weekly win in over a year, but he’s been creeping closer in the ratings since the election. Fallon still wins among youthful demographics, Nielsen said.

Meanwhile, President Trump lost a ratings competition to his predecessor. Trump’s interview with Bill O’Reilly on the Super Bowl preview show was seen by 12.2 million people on Sunday, compared to the 14.9 million who watched CBS’ Gayle King interview former President Obama on last year’s show. In fairness to Trump, Fox aired the interview 25 minutes earlier in the pregame show than CBS, which showed it closer to kickoff.

The Super Bowl gave Fox the easy win in prime time. The network averaged 29.7 million viewers in prime time, followed by CBS with 6 million, ABC with 4 million, NBC with 3.7 million, Univision with 1.8 million, the CW with 1.6 million, Telemundo with 1.4 million and ION Television with 1.2 million.

NBC’s “Nightly News” topped the evening newscasts with an average of 9.1 million viewers. ABC’s “World News Tonight” was second with 9 million and the “CBS Evening News” had 7.3 million viewers.