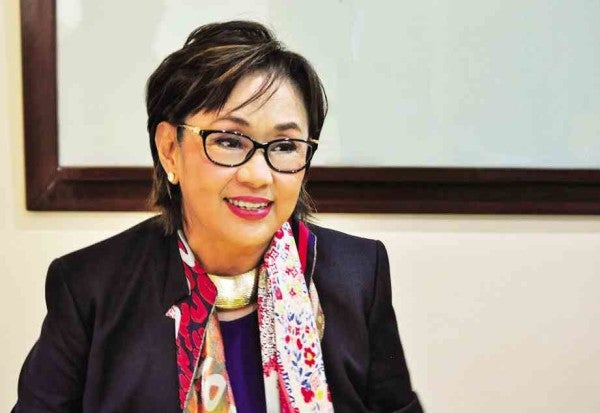 It’s been 19 years since Vilma Santos acquiesced to the request of 12 priests, who asked her to take a shot at politics. After prolonged hemming and hawing, however, the acclaimed actress quickly parlayed her award-winning cachet and enduring popularity into political gold, with impressive stints as mayor of Lipa and, later, the first female governor of Batangas.

In fact, as any political pundit worth his salt would tell you, had Vilma chosen to run as Vice President last May, she would have easily won. But the 63-year-old actress wouldn’t be where she is right now if she isn’t as realistic as she is erudite about the contentious decisions she has to make in life.

As she told her husband, Sen. Ralph Recto, after she won her first public post (in Lipa), “Nanalo ako—paano ’yan (I won—what now)?”

Now that she’s a legislator, representing the sixth district of Batangas (Lipa) at the 17th Congress, Vilma still errs on the side of caution, but is decisive enough to leave no stone unturned to prove that she’s no political wallflower alongside her more experienced colleagues.

It’s this perception of disarming vulnerability that works very well with her honesty and uncommon candor—and wins even her naysayers over. “I don’t claim to know something I don’t. After I won in Lipa, I took a crash course in public administration in UP—I refused to wing it.

“In Congress, the first-timers went through an orientation session to give us an idea what to do during hearings. We had mock sessions,” she told the Inquirer when we visited her for this exclusive interview at her swanky office in Batasan.

“As of now, I’m still adjusting to my new role. It’s my job to legislate laws—which requires me to understand national issues. After all, you can’t expect me to vote for or against federalism or the death penalty if I don’t know anything about it.

“I ask if I don’t understand something. That’s why I’m thankful to the other lawmakers because they come to my defense when I need help. They teach me, support my bills and tell me how things are done. ’Pag napapansin nilang medyo nahihirapan ako, sinasalo nila ako (they come to my rescue)—and I truly appreciate their kindness!

“In politics, you do the chasing—and it doesn’t pay as much, unless gagawa ka ng kalokohan.

“More and more, I’m enjoying what I do because I meet different people from all over the country—imagine, we’re almost 300, excluding the staff!”

Vilma works hard at what she does—and her work with the committees she belongs to proves this. When we visited her three hours before a session, Ate Vi just came from hearings that discussed basic education and tariffs.

Would Darna and Dyesebel, two of the actress’ most iconic screen roles, be as knowledgeable?

If that doesn’t impress you, wait till you learn about the posts she holds in Congress: She’s chair of the Civil Service and Professional Regulation Committee (first-timers aren’t normally asked to head a committee), vice chair of the Local Government and Globalization and WTO committees, and is a member of 10 other committees. Not bad for a newbie.

Excerpts from our chat with Ate Vi: 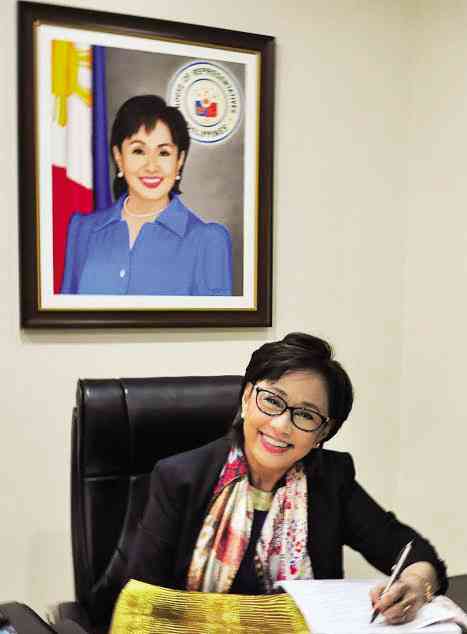 How different is your work as a congresswoman from that of a governor or mayor? They’re quite different from one another. My work in Congress is predominantly legislative in scope, whereas a mayor or governor’s job is administrative, which I miss, because it allows you to work directly—and hand-in-hand—with your constituents.

I prioritized issues that had to do with social services—health, education, job opportunities, a safe place for people to live.

’Pag mayor or governor ka, the implementation of projects is quicker—you even get to decide on your budget. This time last year, I already knew how many schools, roads and health centers I’d build. As a congresswoman, the budget you’re given comes from the national government and is coursed through an agency, like, say, the Department of Health. For 18 years, nasanay ako na direkta kong nagagawan ng programa ang mga proyekto ko.

Don’t you get tired of the people in Congress asking for selfies with you? Don’t you find it disruptive?  I’m used to it because I’ve been in show biz since I was 9. Yes, it gets distracting sometimes, especially if you need to focus and think about what’s being discussed. At the same time, I also should be thankful because it means they’re interested in me.

Do you feel the need to be more outspoken now that you’re in public service? I’m more careful now because I’m aware that whatever I say influences people. You can’t dispense irresponsible advice or issue flippant comments.

Any comment about EJKs (extrajudicial killings)? I support President Duterte’s war on drugs—it’s about time we take the issue seriously. But while we’re aware of the dangers of drug abuse, we can’t solve crimes by killing people. If you ask me, everybody deserves a second chance. Hindi tayo puwedeng basta magbitaw ng kung kaninong pangalan  [without proof], at patay lang nang patay. There’s a better way to do this. Kailangang nasa tamang lugar.

Wasn’t the drug menace a problem in Batangas when you were governor? Not as big as it appears in other parts of the country. But when I was a mayor, I received death threats after drugs (worth P1.5 million) were found in a lab in Lipa. That really scared me (laughs)!

What did you do? Nag-leave ako for two weeks! When I got home, I kept praying. I was crying because ang feeling ko, “Do I deserve this?” I thought, “Ibinoto n’yo ako—and I try to do my job well, and you threaten me?” I said, “Ayoko na!” I wanted to quit because I’m a mom.

But Ralph reminded me of my obligation to the people who voted for me. I prayed for enlightenment. I said, “Lord, you know what my intentions are. I leave everything up to you. Bahala ka na sa akin.” Naiiyak ako (laughs)!

What’s your stand on political dynasties? If you don’t want the same names, then don’t vote for them. Choose younger people who can usher in change for the better.

Is there more room for you to make movies now? Yes. Ngayon lang ako makakaranas ng recess (laughs). In contrast, the work of a governor or mayor is 24/7. But now isn’t the right time to attend show biz functions or go back to acting because there’s still so much to learn in my new line of work.

Any thoughts about the “refocused” MMFF (Metro Manila Film Festival)? I’m an artist, so I understand where the people behind it are coming from. They want an alternative to formulaic films and give indies a chance.

But I don’t see anything wrong with having separate festivals for indies and mainstream films—I support it. At the end of the day, it’s still the theater owners’ call because business is business.

Should actors like Meryl Streep talk about politics and other social issues? You mean Meryl’s speech against Donald Trump (laughs)? Why not? Expressing contrarian views is a human right. And she is as intelligent a person as she is as an actress.

Do you see similarities in the way Presidents Trump and Duterte are running their countries? In a way, they rule with an iron fist. But we should give them a chance. President Duterte’s trust rating is very high (86 percent), which means he has the people’s support. Six months aren’t enough to gauge a president’s performance. Let’s hope for the best.

What are your thoughts on Vice President Leni Robredo’s situation? I feel bad for her because she’s also a woman. She’s in a very difficult situation.

Didn’t you go through a similar situation the first time you entered politics?  The difference is, I didn’t get on the President’s bad side. The people I crossed swords with didn’t believe that I could be a competent leader. But hers is different because her situation is on a national scale.

Sana, may pagbabago because I know her heart—all she wants to do is serve. Unlike headstrong women leaders like Miriam Defensor-Santiago and Leila de Lima, her approach is that of a nurturing mother. She needs to be given an opportunity to show what she can do.

What are your pet peeves? Don’t promise me anything you cannot deliver. If you don’t know how to do it, huwag kang magmalaki if you don’t want to cross me.

I also don’t like insincere people…’yung mabait sa harap mo, tapos kung anu-ano ang sinasabi behind your back. So, even with my past boyfriends or ex-husband (laughs), or even with Ralph, I say, “If you did something wrong, tell it to my face. Word gets around easily because I’m a celebrity. Aminin mo na lang kung may naka-date kang iba.

Was that the usual reason why you broke up with your past boyfriends?  Hindi, iba ’yun! And that’s another story (laughs)!