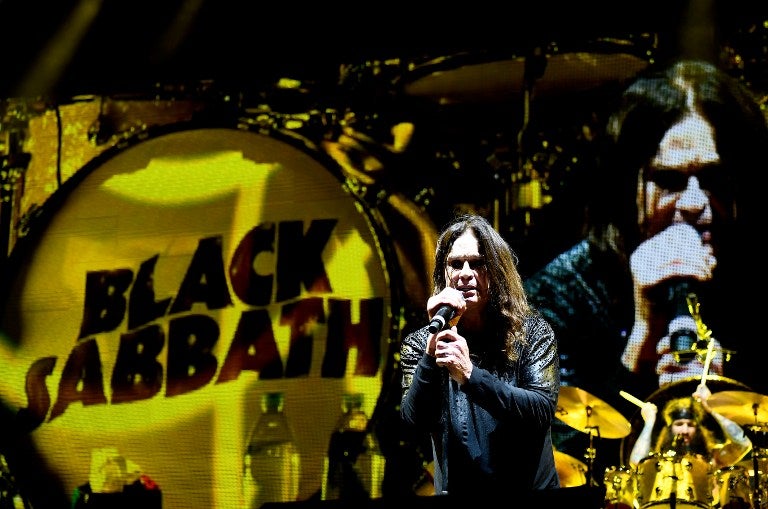 LONDON, United Kingdom — Black Sabbath, the pioneers of heavy metal, ended their last-ever tour with a final concert in Birmingham, their home town where it all began nearly 50 years ago.

The godfathers of the genre bowed out on Saturday with a farewell show at the 16,000-capacity National Exhibition Centre Arena in the central English city.

Guitarist Tony Iommi, singer Ozzy Osbourne, bass guitarist Geezer Butler and drummer Bill Ward got together in 1968 and created a sound filled with the brooding menace of horror films.

Sabbath kicked off their mammoth farewell run of 81 concerts, entitled The End Tour, in January last year in the United States.

The world tour took them to Australasia, Europe, North America again, South America, then back to Europe to finish in Birmingham with shows on Thursday and Saturday.

Iommi, 68, the only ever-present member, Osbourne, 68, and Butler, 67 — Ward has not played with the band since 2012 — took to the stage one last time, joined by drummer Tommy Clufetos and keyboard player Adam Wakeman.

Their final song was streamed live on Facebook. The band bowed out with “Paranoid”, their breakthrough chart hit from 1970, as ticker tape and balloons blew out over the audience.

Pyrotechnics went off as they took their final bow. The band put their arms around each other and posed for a farewell picture with the cheering crowd behind them.

“Thank you, goodnight, thank you so much,” Osbourne said as they left the stage, Iommi giving a thumbs up as he waved goodbye.

Black Sabbath was instrumental in creating heavy metal in the early 1970s with dark and high-volume guitars coupled with a keen interest in the occult.

The hippy peace-and-flowers vibe of the 1967 “Summer of Love” bypassed industrial Birmingham, which instead still rang with the thunder of factories.

On his final day as a sheet metal worker, 17-year-old Iommi accidentally sliced off the tips of the middle two fingers on his fretting hand.

Though his future as a guitarist seemed over before it began, he was determined to continue playing and fashioned fingertips out of melted plastic bottle tops.

The left-hander had to come up with new ways of playing chords, and also tuned down his guitar to a darker, lower tone to make bending the strings easier. The resulting menacing sound spawned the heavy metal genre.

Geoff Nicholls, who was the metal band’s keyboardist from 1979 to 2004, died last Saturday aged 68 following a battle with lung cancer.

Iommi said Sabbath were “not saying goodbye as such… we don’t want to do any more world tours.

“I wouldn’t rule out doing a one-off show. Or even an album. I think the door’s open,” he told the BBC, though Osbourne, said: “As far as I am concerned, this is the end… I’m not doing it again.”

US-based Osbourne, dubbed the Prince of Darkness, admitted his emotions were “all over the place” since returning home for the final shows.

“Since I’ve got to this building, I’ve been happy, I’ve been tearful,” he said.

“One of the proudest things I have in my heart is the fact that Black Sabbath wasn’t a band that was created by some big mogul,” he said.

“It was four guys who said, ‘Let’s have a dream’, and it came true beyond our wildest expectations.” CBB