EXO-Ls react to Maxine Medina’s ‘we are one’ answer 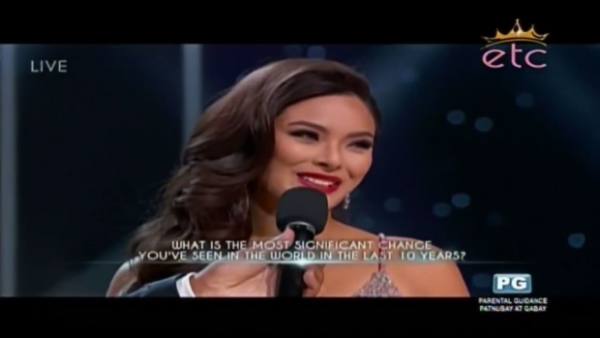 Could it really be that Medina’s answer hints at her being an EXO-L fan? Image: ETC screen grab

Amidst the glitz and glamour of the recently concluded Miss Universe competition, one thing definitely stood out – “We are one”

This is the first thing EXO-Ls (fans of K-Pop boy group EXO) noticed.

Various fans tweeted that Maxine Medina is definitely an EXO-L after she ended her answer to the Q&A portion with “We are one” which is EXO’s signature tagline. Some even wanted to know who her bias (favorite member in a K-Pop group) is.

“We are one, as one nation, we are all together”

Did someone from #MissUniverse just mentioned EXO ‘s “We Are One” slogan?!? Did you just reveal your inner EXO-L pic.twitter.com/gY4VQjO5QI

MAXINE MEDINA: “We Are One”

Former Miss Universe Pia Wurtzbach proclaimed last year that she is an ELF (fans of K-Pop boy group Super Junior) and that her bias is Choi Siwon.

As one of the hottest K-Pop groups in the Philippines, EXO is set for a two-day concert at the Smart Araneta Coliseum on February 25 and 26, 2017.

EXO-Ls can practice fan chants and prepare their selves for the ultimate concert experience by watching EXO’s performances and shows on Viu, for free forever!