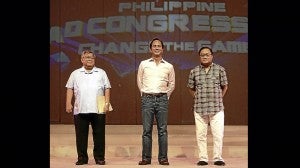 This was affirmed on Friday by the top executives of the country’s three rival television networks in a historic encounter at the 22nd Philippine Ad Congress, the biennial gathering of advertisers that this year has chosen the theme “Changing the Game.”

ABS-CBN, GMA 7 and newcomer TV5 may be in a deathly race against one another for ratings, but on Friday their chief executive officers (CEOs)—Eugenio Lopez III, Felipe L. Gozon and Manuel V. Pangilinan, respectively—for the first time stood side by side in one stage to share their thoughts on the future of television and media.

The three media giants not only shared similar beliefs on the need to keep up with changing technology but also in their confidence about the future of the broadcast industry even if there are now three major players competing for advertising revenue.

In fact, Lopez admitted to having changed his mind about his belief that a third major player would mean a shrinking advertising pie and diminished profits for television networks, noting that ABS-CBN’s revenues have not fallen despite the entry of TV5.

Pangilinan, who spoke before Lopez, earlier said that GMA 7 and ABS-CBN “should worry about us because we are the certified No. 3.”

However, he said he did not know which of the two other networks was No. 2, eliciting laughter from the audience.

“Just thinking being stuck in third place has made me extremely paranoid,” Pangilinan said jokingly.

In response to a question from TV5 news executive Luchi Cruz-Valdez, Lopez said TV5 was a competitor “not to be taken for granted.”

Lopez, Gozon and Pangilinan were given about 15 minutes each to make their presentation and another 10 minutes to answer questions from personalities from the rival networks—with GMA’s Mike Enriquez grilling Pangilinan and ABS-CBN’s Korina Sanchez posing questions to Gozon.

In their speeches, the three CEOs presented their views on the role of television in the digital age where the development in technology has been unprecedented.

“In the next ad congress, which is two years from now, we will be talking about media revolutions caused by technologies that don’t even exist today. Or not even imagined today,” Lopez said.

He said that even if many think that the future of media is unknown, ABS-CBN would still know where to go because the motto “Service of the Filipino” is their guiding light.

Lopez said ABS-CBN, which celebrates its 60th anniversary next year, had connected to Filipino audiences all over the world through all kinds of media platforms.

“This gave us the privilege to know so much more about their nature and their aspirations. And that is why we can make this assumption: The future of media may appear to be technological, but at its core, it will remain emotional,” he said.

According to Lopez, ABS-CBN will have more digital offerings that are multitouch hubs of information, experiences, services and conveniences.

“We believe that technology will change everything, except the human nature to crave for recognition, affirmation, connection and inspiration to be the best that they can be for self-fulfillment, for family and for community,” he declared.

Gozon said television has reached its defining moment because of fast-evolving digital technology which has made for endless possibilities.

“Content made for television can now be seen in at least three streaming—the television itself, the computer and the mobile devices. It has also broken new ground in social networking, so that digital citizens of the world can traverse all media seamlessly,” he said.

Gozon said technological companies like Google and Apple recognize that the video viewing experience is at its best on a larger television screen, which he said has led to the aggressive development of gadgets (Zentap boxes) that allow for the streaming of video content.

He said even the television set had morphed and converged into computer and television technology.

“As the World Wide Web is bursting at the seams, it will use entertainment, information and everything else in between. Social networking sites Facebook and Twitter, and search engines Google and Yahoo have become million-dollar game changers that simply blow our minds,” Gozon said.

He said social TV is one of today’s buzzwords where some viewers don’t just sit back in couches and watch shows but let their friends know in real time what they are watching.

Gozon said TV applications have also allowed viewers to comment on a show in real time, look for information about the show and even take a closer look at products that are being advertised.

“Digital technology has given consumers more opportunity to control their lives. The viewers now have a say when and where to watch the shows that matter to them,” he said.

With television still the cheapest form of entertainment to some 94 percent of television-owning Filipino households, Gozon said it will remain the “medium to beat for many years to come if it continues to provide superior entertainment and remains the medium of the vast majority of Filipinos.”

Pangilinan introduced a fictional 22-year-old Christine in his speech to drive home the point that the digital age is here to stay, with the youth as the targeted market.

Pangilinan portrayed Christine as a young woman who wakes up hooked to her digital gadget and computer which are indispensable in her daily life.

“So that’s Christine, [tuned] not to the past but the present and the future. That’s our model today and our future,” he said.

“Indeed, the Internet has changed the way we’re thinking, changing the way we act, changing our habits,” he said.

Pangilinan said that the test of the success of a network is how it can improve and empower the lives of viewers.

He stressed that the duty of the media industry is to police standards to ensure that these would effect positive changes.