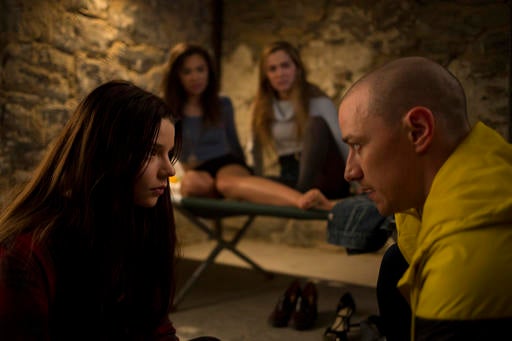 The movie, starring James McAvoy and Anya Taylor-Joy, added $25.7 million for a cumulative total of $77.4 million, a drop of just 34 percent seen by its fans as vindication for a return to form from the filmmaker behind the “Sixth Sense” and “Unbreakable.”

“That would be a small drop for any movie, especially one that debuted with $40 million,” film writer Scott Mendelson commented for Forbes magazine.

“But a horror movie holding like this with numbers like this is nothing short of remarkable. This is frankly sensational.”

In at number two with an underwhelming $18.2 million debut weekend was “A Dog’s Purpose,” a movie plagued by controversy after video footage emerged of an apparently terrified canine being forced into rushing water on the set.

“Hidden Figures,” back in the Oscars conversation after taking the top prize at Sunday’s Screen Actors Guild Awards, placed third for a second weekend, making $14 million.

The Fox comedy-drama, which stars Taraji P. Henson, Octavia Spencer and Janelle Monae as a real-life trio of African-American women dealing with workplace segregation at NASA in the 1950s and 60s, has made a healthy $104 million in six weeks.

“Resident Evil: The Final Chapter,” the sixth and last installment in the series starring Milla Jovovich and loosely based on the video game series of the same name, debuted at number four with $13.7.

In fifth place again was “La La Land,” a nostalgic tribute to the Golden Age of Hollywood musicals. It earned $12.2 million this weekend after garnering a boatload of accolades, including a record seven Golden Globes earlier this month.