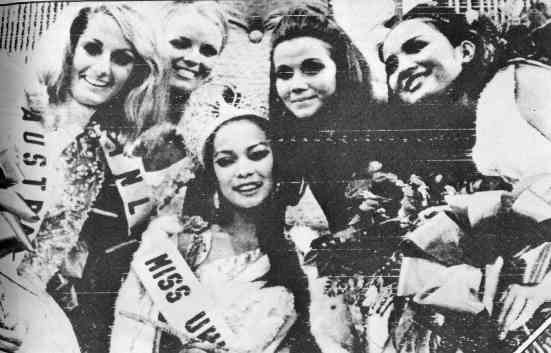 Gloria Diaz (center) and her court 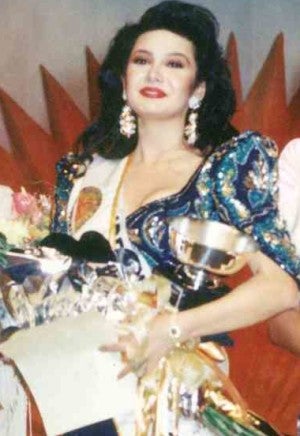 Today, the new Miss Universe will be crowned in glittering rites to be held in the Philippines, so it’s relevant to highlight the exceptional popularity of beauty pageants in these parts.

More to the point, that popularity and, at times, even frenzy have made it possible for quite a number of our beauty queens and titlists to become famous and adored show biz luminaries, as well.

To illustrate, and focusing for the timely nonce on just our Miss Universe bets alone, some 20 of them have become show biz or media stars through the years—a number of them popular and celebrated to this day.

Harking way back to the ’60s, we recall that Josephine Estrada became a stellar draw in Philippine movie productions after she won the Binibining Pilipinas-Universe title in 1962. The very next year, Lalaine Bennett followed suit.

Pilar Pilapil came right after—and it’s impressive and instructive to point out that the flirtatiously lovely star has sustained her stellar cachet through the decades. In fact, she’s featured in the new ABS-CBN teleserye, “A Love to Last,” topbilling Bea Alonzo and Ian Veneracion, which has begun its storytelling.

Ditto for Gloria Diaz, the first Filipino to win the Miss Universe title—she joined the movies soon after her reign in alluring and seductive roles in films like the “iconically” titled “Ang Pinakamagandang Hayop sa Balat ng Lupa” (which alluded to her universal cachet).

Like Pilar, Gloria has survived the toll of time and age, and continues to appear on the big and small screens. In addition, Gloria’s daughter, Isabelle Daza, has become a TV luminary in her own right.

For her part, beauty titlist Chat Silayan came from a family of acclaimed actors, so it was no surprise that, after her own reign, she too became a thespian.

Other beauty queens-turned-entertainment luminaries: Maria Isabel Lopez, another durable beauty and talent, who initially went the “sexy” route but, in maturity, has distinguished herself in textured character roles.

Miriam Quiambao similarly gave performing a go, but has made her mark more as a TV program host and nature and environment advocate. Bianca Manalo has become an occasional lead and supporting player in teleseryes.

Venus Raj used to be one of the cohosts of a morning show on TV, and is currently cohosting a program about the Miss Universe pageant.

Instructively, even the foreign beauties who competed in the Miss Universe tilt held in Manila in 1974 ended up making a Filipino film—or 10! 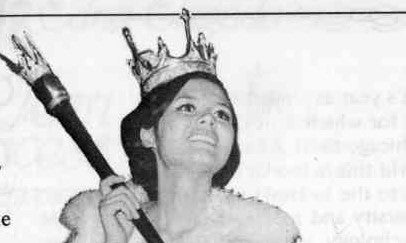 They were led by the top winner herself, Amparo Muñoz, who topbilled local flicks, including “Hayop sa Ganda,” where her costar was our own Miss Universe, Gloria Diaz.