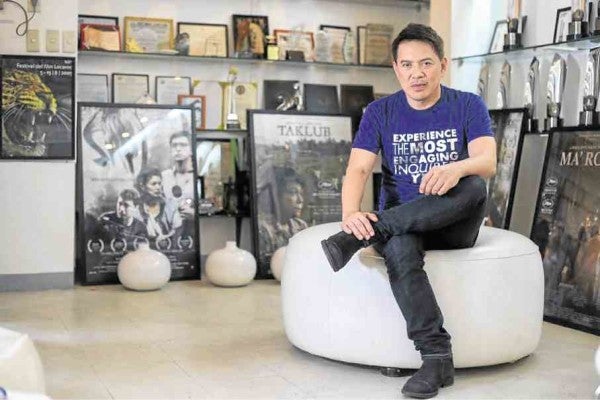 “There will always be situations you can’t control. You just have to learn to adapt. If you’re easily discouraged, you’ll end up with nothing,” said Mendoza, who has 13 movies under his belt, the most recent of which was “Ma’ Rosa.” The film, which tackles drug trafficking and police brutality, won for lead star Jaclyn Jose the best actress award at the 2016 Cannes Film Festival in France.

Mendoza added: “From the time I made my first film (2005’s “Masahista”) to my latest, I say nothing much has changed. Making movies in the Philippines is still extremely challenging. It isn’t for the fainthearted.”

In fact, a producer of “Ma’ Rosa” backed out just before he began shooting. Mendoza said the same thing happened to “Thy Womb” (2012), his film with superstar Nora Aunor that was shot in Bongao, Tawi-Tawi. “Eventually, I was able to find another producer, but it wasn’t easy. I had to learn to adjust. I make sure to always deliver, even if I have to borrow money or invest in the project myself.”

“Thirteen films later, the struggles in making a film are the same. It’s just a matter of acknowledging that you’re a filmmaker from a developing country,” Mendoza pointed out.

Creating an audience for the kind of films he has been making is another hurdle that Mendoza said he has to overcome. “If I keep giving the audience only what they want and not what they need, I’d be just one of those filmmakers,” he pointed out. “You don’t need to compromise your methods and aesthetics to please an audience. Listen to your gut. Give them something that will disturb them and encourage critical thinking.”

What drove Mendoza into doing films that he said were “not just meant to entertain,” was his need to “break the mainstream mold.” He explained: “As a storyteller, I realized that I have a responsibility to educate the Filipino audience. There’s more to filmmaking than the prestige of working with famous actors. It’s that knowledge that pushed me to create films that I hoped have set me apart from other directors.”

“Masahista,” starring a young Coco Martin—now one of ABS-CBN’s top actors—is about a man trying to survive poverty by offering massages and sexual favors. This was followed by “Kaleldo” (2006), a thought-provoking film on a dysfunctional family.

Mendoza went on to make masterpieces like “Serbis,” “Lola,” “Captive” and “Taklub” that drew rave reviews in international film festivals. “Kinatay,” about a criminology student who joins a crime syndicate to earn money for his young family, eventually won for him the best director award in 2009, also at the prestigious Cannes film fest.

“I am inspired by issues and problems that I see around me. I base my stories on real-life situations,” he shared with the Inquirer. “Some of my films are inspired by news items either from television or the newspaper.”

That was why, Mendoza said, he didn’t have any second thoughts when the Inquirer tapped him to be one of its brand ambassadors for the recently launched #MyINQUIRER campaign, highlighting the new media quintet experience. “It’s all about credibility. I don’t mind being associated with a credible company,” he stressed.

“I remember how happy it made me to see my photo on the paper’s front page when I won in Cannes. There are only two ways to land on the front page—either you do something really bad or perform beyond everyone else’s expectations,” Mendoza pointed out. “It makes me feel proud that a credible newspaper is writing about my achievements. A group of foreign journalists who interviewed me at an international film fest said they know what I have been doing here because they have read the Inquirer.”

Mendoza is also cofounder of the three-year-old Sinag Maynila film festival, created to pay tribute to the creative minds of local independent cinema.

Speaking as a Filipino icon, Mendoza said he hoped Filipinos would do away with crab mentality and aspire for a “principled and dignified” life. He added that as a filmmaker, “I can only do so much. In fact, I don’t believe that my films can change the world or the Filipino nation. I promise to always be committed to doing the kind of films I am now making, and I will keep doing them well.”