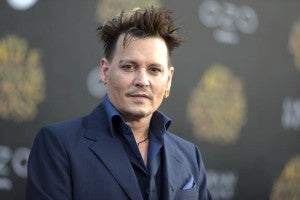 In this photo, taken May 23, 2016, Johnny Depp arrives at the premiere of “Alice Through the Looking Glass” at the El Capitan Theatre, in Los Angeles. Johnny Depp is suing his former business managers alleging they mismanaged his earnings throughout his career, although the company says the actor’s spending is to blame. Depp’s lawsuit filed Friday, Jan. 13, 2017 in Los Angeles Superior Court against The Management Group seeks more than $25 million, alleging its owners failed to properly pay his taxes, made unauthorized loans and overpaid for security and other services, but the company’s attorney says the managers tried for years to control Depp’s spending. (Photo by RICHARD SHOTWELL/Invision/AP)

LOS ANGELES — Johnny Depp sued his former business managers on Friday alleging they mismanaged his earnings throughout a lucrative period of his career, although the company says the actor’s spending is to blame.

Depp’s lawsuit filed in Los Angeles Superior Court against The Management Group seeks more than $25 million, alleging its owners failed to properly pay his taxes, made unauthorized loans and overpaid for security and other services.

Michael J. Kump, an attorney for The Management Group, calls Depp’s lawsuit a “fabrication” and wrote in a statement that Depp never alleged any wrongdoing. The company “did everything possible to protect Depp from his irresponsible and profligate spending,” Kump wrote.

Depp’s lawsuit accuses the company and its owners, attorneys Joel and Robert Mandel, of receiving $28 million in payments for their services over the roughly 16 years they managed his finances. The company “actively concealed the true state of Mr. Depp’s finances while driving him deeper and deeper into financial distress,” the lawsuit states.

Depp hired the Mandels in 1999 and their compensation was not subject to a written contract, his lawsuit states. It states they received 5 percent of his income on hit films such as the “Pirates of the Caribbean” franchise and other major releases, including “Alice in Wonderland” and the 2005 film “Charlie and the Chocolate Factory.”

It alleges the company failed to file Depp’s tax returns on time, costing him nearly $5.7 million in penalties. The lawsuit also alleges the company overpaid for several services, including forgetting to terminate the lease on a home where Depp’s mother lived temporarily, and spending $8 million on security between 2012 and 2015 alone.

Depp’s learned of the problems after hiring a new management company in March 2016, the complaint states.

Kump wrote that Depp owes The Management Group $4.2 million from a $5 million loan they provided the actor. “His tactics and lawsuit will fail, and he will be forced to pay back the loan as promised,” Kump wrote.

The lawsuit came on the same day Depp finalized his divorce from actress Amber Heard. Their divorce judgment calls for the actor to pay his ex-wife $7 million in installments – which she has earmarked for two charities – while allowing him to keep numerous properties and vehicles.

Depp isn’t the only blockbuster star to take his former managers to court alleging mismanagement. Nicolas Cage sued his former business manager seeking $20 million for alleged mismanagement in 2009 and the manager in a countersuit cited the actor’s spending for his financial troubles. The case was resolved before trial. –Anthony McCartney