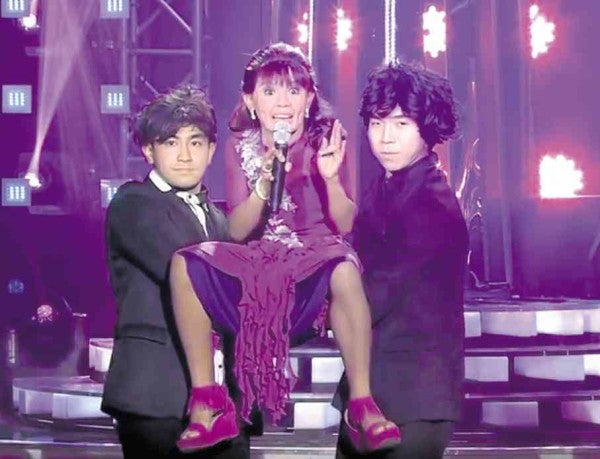 However, Xia’s performance was merely proficient and offered no surprises—and the strapless costume she wore was too “adult” for the child performer, even within the context of spoof or tribute.

Elha Nympha fared better with her Beyoncé Knowles impersonation, for which she didn’t have to go “slightly sexy” and just focused on belting the number out of the ballpark.

The third juvenile impersonation, Justin Alva, was “safely” assigned to come across as a Michael Jackson clone, and he passed muster. Trouble was, many child singers have gone the same predictable route, so his performance was rather underwhelming.

Not to worry, though! The debut telecast had reserved its best bet for last. McNeal “Awra” Briguela saucily and sensationally spoofing—Mommy Dionisia Pacquiao!

From the get-go, Awra’s number was a hot hit. Even before he actually performed, just the sight of him made-up, bewigged and costumed to look like a mini-me of Mommy D was already a winner. Kudos to the production person who thought up that inspired brainstorm!

For his part, Awra worked hard and creatively to make his performance live up to the concept’s many possibilities.

He spoofed Mommy D without excessively dissing her limitations and “TH” projection, as the tilt’s jurors and studio audience cheered him along.

If the new impersonation tilt is able to come up with a big, bright and blithe surprise like that every week, viewers will keep watching and loving the show.

True, inspiration doesn’t flare and flair up on cue, but the high standard of “unexpected” entertainment that the Mommy D spoof set last week could make succeeding telecasts look drab and anticlimactic, unless the show’s outrageous surprise factor is sustained.

We hope that, aside from Awra, the impersonation tilt has enough “risk-taking” contestants to fully live up to and vivify its idea people’s brightest, blithest and most far-out concepts.

We’re pinning our hopes on Alonzo Muhlach, Niño’s lookalike scion and heir, who’s shown in past performances that he has a puckish sense of humor of his own.

Xia is another bet who strikes us as being naturally creative and spontaneous, and is willing to take risks.

Yes, her initial impersonation of Selena Gomez was rather predictable and “safe,” but she should be challenged to come up with a more “out of the box” spoof, depending on the unexpected “craziness” of the concept. What about Xia channeling Lady Gaga? That could be a hot hoot!

As for the members of the tilt’s jury—Gary V, Sharon C, and Ogie A—they were so busy gushing over the four initial contestants’ numbers that they stopped short of making their mentoring mark.

Yes, young talents should be “encouraged,” but they’re also supposed to be told how to improve their acts, so the jurors shouldn’t shirk that responsibility. There’s always room for improvement, right?