No one could make us laugh through pain like Carrie Fisher 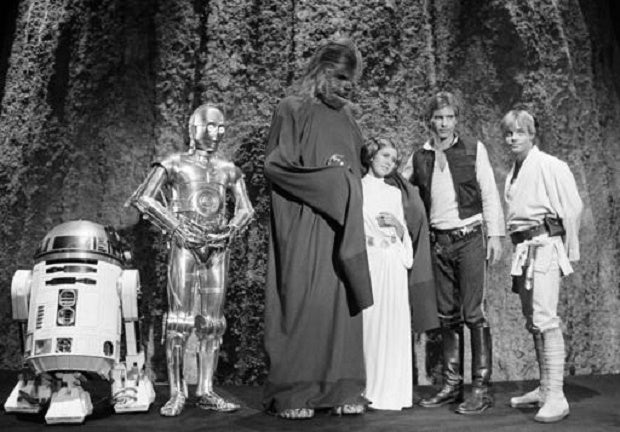 In this Nov. 13, 1978 file photo, shows, from left, Kenny Baker, Anthony Daniels, Peter Mayhew, Carrie Fisher, Harrison Ford, and Mark Hamill during the filming of the CBS-TV special “The Star Wars Holiday” in Los Angeles. On Tuesday, Dec. 27, 2016, a publicist says Fisher has died at the age of 60. AP FILE PHOTO

NEW YORK — No one could make us laugh through the pain like Carrie Fisher.

The daughter of Hollywood stars Eddie Fisher and Debbie Reynolds, and a survivor of early fame, drug addiction and bipolar disorder, she wrote with unsentimental wit and understanding about her private struggles and about an industry she was raised in but stood apart from.

Fisher, known to the world as Princess Leia of “Star Wars,” died Tuesday at 60, four days after falling ill aboard an airline flight. Media reports said the actress had suffered a heart attack.

“I do believe you’re only as sick as your secrets. If that’s true, I’m just really healthy,” she said in a confessional 2009 interview with The Associated Press.

The public fell in love with her twice: as Princess Leia and as the wry truth-teller of such books as “Postcards From the Edge,” ”Wishful Drinking” and “The Princess Diarist,” in which she revealed having an intense affair with “Star Wars” co-star Harrison Ford.

Fisher told plenty of secrets about others — about her parents’ breakup when she was 2, about being advised by Warren Beatty on wearing a bra in “Shampoo,” and about arguing with then-husband Paul Simon about whether it was better to be a man or a woman.

Asked by NPR recently why she wrote about her fling with Ford, who was 15 years older and married, she joked that she could hold back no longer because he had refused to die: “I kept calling and saying, ‘When are you going to die because I want to tell the story?'”

But she was toughest on herself and unafraid to turn trauma into humor. She became the most knowable of celebrities, with a great and generous gift for bringing us into her unusual life.

“One of the therapists came in to admit me and asked how long I had been a drug addict,” she wrote in Postcards,” her autobiographical novel that became a movie of the same name. “I said I didn’t think I was a drug addict because I didn’t take any one drug. ‘Then you’re a drugs addict,’ she said. She asked if I had deliberately tried to kill myself. I was insulted by the question. I guess when you find yourself having overdosed, it’s a good indicator that your life isn’t working.”

She is survived by her mother; her daughter, Billie Lourd, from a relationship with talent agent Bryan Lourd; her brother, the actor-filmmaker Todd Fisher; and her half-sisters, actresses Joely and Tricia Leigh Fisher. Her father died in 2010.

Born and raised in Beverly Hills, Carrie Fisher was a bookish child who had difficult relationships with both parents. In a celebrity breakup that made headlines everywhere in 1958, Eddie Fisher left his family for Elizabeth Taylor.

Eddie Fisher was hardly present for his daughter in her early years, and Reynolds’ second husband, shoe store magnate Harry Karl, was even worse. He squandered his own money and Reynolds’ on gambling and prostitutes and left the actress and her children broke and devastated.

Carrie Fisher went into the family business early — too early, she would later say. She was performing on stage by age 12 and appeared with Reynolds in the 1973 Broadway revival “Irene.” She was still a teenager when she made her feature film debut in “Shampoo” in 1975.

Even after “Star Wars,” Fisher would speak often of feeling overshadowed by her mother and about the need to break away, a conflict dramatized in “Postcards From the Edge.”

Mother and daughter were estranged for years but reconciled later in life and came to admire each other’s talent and determination. “Bright Lights: Starring Debbie Reynolds and Carrie Fisher,” an HBO documentary, is scheduled for release in 2017.

Fisher’s film credits included a wide range of spoofs, musicals and romantic comedies, from “Austin Powers” and “The Blues Brothers” to “Hannah and Her Sisters” and “When Harry Met Sally …” Meryl Streep was the star when “Postcards From the Edge,” with a screenplay by Fisher, was adapted into a film of the same name in 1990. Shirley MacLaine played Streep’s mother, the stand-in for Reynolds.

But for millions, Fisher was Princess Leia, with her now-iconic hair bagels and metal bikini. She uttered the immortal phrase “Help me Obi-Wan Kenobi, you’re my only hope” in the original “Star Wars” in 1977.

Director George Lucas, who considered Jodie Foster, Amy Irving and dozens of others for the role, said he had been looking for an actress who could “hold her own” against her male co-stars.

In her 2008 memoir “Wishful Drinking,” she recounted how Lucas told her on the first day of shooting that she couldn’t wear a bra under her costume because “there’s no underwear in space.” Lucas, she said, later explained that a woman could be strangled by her bra in the weightlessness of space.

Fisher wisecracked in her book that that would make for a “fantastic obit,” adding: “I tell my younger friends that no matter how I go, I want it reported that I drowned in moonlight, strangled by my own bra.”

Fisher would make a lot of wisecracks about the role that made her pop-culture royalty and led Reynolds to note ruefully she was now regarded as the mother of Princess Leia.

Fisher disliked her hairstyle, disparaged her hybrid British-American accent in the films and was appalled by some of the “Star Wars” merchandise, including a Princess Leia candy dispenser.

Given the chance, she would have preferred to play Han Solo.

“When I first read the script I thought that’s the part to be, always wry and sardonic,” she told a gathering in England in 2015. “He’s always that. I feel like a lot of the time Leia’s either worried or pissed or, thank God, sort of snarky. But I’m much more worried and pissed than Han Solo ever was, and those aren’t fun things to play.”

Her drug problems pre-dated “Star Wars.” She recalled smoking pot at age 13 (She would later learn that there is a kind of marijuana called “Princess Leia.”) and dropped acid at 21.

She used so much cocaine that even world-class partyer John Belushi, who died of a drug overdose at 33, warned her to stop.

In her 20s, she was diagnosed as bipolar and treated with electroshock therapy and medication, which she wrote about in the memoir “Shockaholic.”

“People relate to aspects of my stories, and that’s nice for me because then I’m not all alone with it,” she told the AP in 2009.

Ever ready to satirize herself, she even played “Carrie Fisher” a few times, as in David Cronenberg’s dark Hollywood sendup “Maps to the Stars” and in an episode of “Sex and the City.” In the past 15 years, Fisher also had a steady career as a television guest star, perhaps most memorably as a has-been comedy legend on “30 Rock.”

Her one-woman show, “Wishful Drinking,” which she had performed on and off across the country since 2006, made it to Broadway in 2009 and was captured for HBO in 2010.