Scoring a contemporary holiday hit a Christmas bonus for Aegis 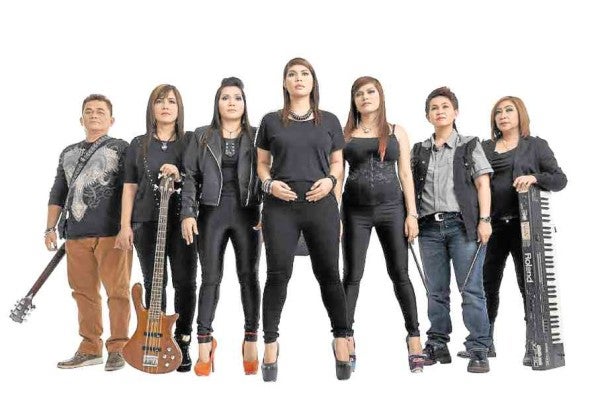 Whenever the pop-rock group Aegis flies out of the country to do shows for Filipinos living overseas, it’s almost a given that their song, “Christmas Bonus,” will be requested. It doesn’t matter whether it’s December or the middle of May—they’re more than happy to oblige. Because, as they plainly put it, “Why not?”

“A lot of people simply like hearing the song no matter what time of the year it is. I’ve been told that some of them feel that the song will bring them prosperity,” Juliet Sunot, Aegis’ lead vocalist, whose pipes of steel have largely defined the sound of the band’s throat-busting torch ballads, told the Inquirer.

“Christmas Bonus” is part of “Paskung-Pasko,” the band’s first and only Christmas album, released in 2000. Penned by Eva Vivar, then-girlfriend of the band’s primary songwriter, Celso Abenoja, the catchy song has turned into an anthem of sorts for employees itching to get their hands on that much anticipated extra pay.

Although “Christmas Bonus” isn’t quite as ubiquitous as Jose Mari Chan’s modern classic, “Christmas in Our Hearts,” one would be hard-pressed to find something more amusingly relatable.

“For all the workers out there, swak talaga ’yung lyrics. Who doesn’t look forward to getting their bonuses and 13th month pay once the ‘ber’ months kick in?” pointed out keyboardist Stella Pabico, the sister of Lito Galindo—the band’s longtime manager and owner of AG Talents.

The song’s popularity—like the many good things that happened to the band’s career—was  unexpected.

Scoring a contemporary Christmas hit is tough, Juliet said, because most people tend to stick to more or less the same set of traditional carols.

“We’re thankful. It’s all good even if we don’t get to do another Christmas album, because we already have ‘Christmas Bonus’ in our discography,” related Juliet, giggling as she recalled that she and her sister/cosinger Mercy Sunot had to wear sexy Santa Claus costumes during the photoshoot for the album cover. 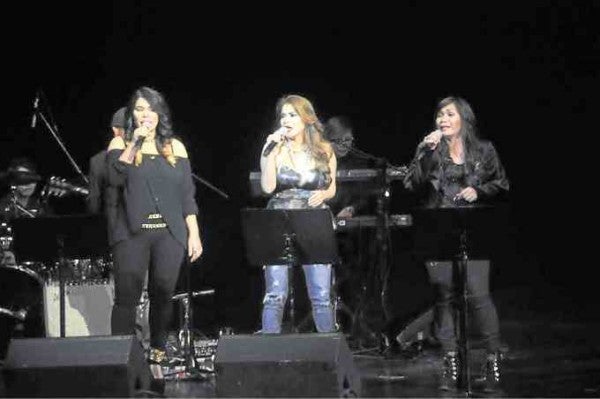 But for all the talk about the song being relatable, the irony is that most of Aegis’ members—which also include Juliet and Mercy’s younger sister, singer Ken Sunot (who joined the band later on), drummer Vilma Goloviogo, guitarist Rey Abenoja and bassist Weng Adriano—haven’t really experienced receiving the bonus they sing about.

They didn’t really get the chance to work at a regular company, they related, because right from the get-go, performing music and playing gigs was how they earned a living. But while that may be the case, the recent spate of new—if a bit unlikely—career opportunities coming their way, they surmised, is perhaps the closest equivalent to getting one.

Just last month, the band headlined a show called “Aegis in Symphony, Symphonic Aegis,” together with the Philippine Philharmonic Orchestra. The venue? The Cultural Center of the Philippines’ Tanghalang Nicanor Abelardo.

The place, admittedly, was foreign to the group that got its start playing and promoting its first album in small bars and watering holes. There, drunk patrons would get into brawls, or even throw coins at the members every so often—usually when they sing their 1998 hit, “Halik.”

Needless to say, the crowd they performed for at the CCP was relatively sober. “Usually, our gigs would have fans going wild midsong. The CCP crowd, on the other hand, was very formal—we weren’t sure how to engage with them,” Mercy said.

Juliet, Mercy and Ken are used to initiating spontaneous, riotous banters with their audience, and so having to follow a structured program and reading spiels threw them out of their element. Luckily, they could always rely on their singing to do the talking.

“When we saw that they were having a good time watching us perform, we finally eased up,” said Mercy. “Before long, we were laughing so much and having such a great time onstage, we forgot to introduce the artists we performed with.”

In the concert, Aegis sang most of its well-loved, karaoke staples—nothing too out of the ordinary. But performing “Nessun Dorma,” the iconic aria from the Italian opera “Turandot,” was another story.

The band, after doing a gig in Dubai, returned to the country only three days before the CCP concert. They had too little time to prepare.

“Obviously, we couldn’t understand the lyrics.  We had to memorize the words, their pronunciations and the melody. E ang titigas ng dila namin. But we’re  thankful everyone was patient with us,” Juliet said of concert director Ariel Yonzon and PPO conductor Herminigildo Ranera.

But the moment they heard the audience’s resounding applause, relief took over. “The show tested our skills,” Juliet said. “It was so different from what we do. We were scared,” added Stella.

For Juliet, the CCP experience—along with the band’s concert at Music Museum last year—would go down as one of the highlights of Aegis’ 18 years (more than 25, if they were to include their time together as the AG Sound Trippers prior to 1998)  in the music  biz. They’re amazed that they’re still getting opportunities to do new things.

Resurgence due to ‘Rak’

The resurgence the group has been enjoying these past couple of years, they credit to the Philippine Educational Theater Association using their songs to create the successful musical, “Rak of Aegis.”

“Our market has always been the masses. But because of ‘Rak,’ we were able to expand our audience,” Mercy said.

Aegis is as busy as ever. After this interview early this month, they headed straight to a 9 p.m. gig at the Casino Filipino Pavilion in Manila. A few hours after the show, they were at the airport, about to fly for an engagement in Davao.

“We will just go home to change clothes. Kailangang lumagare,” Juliet said. “We have to work for our bonus!”

Read Next
Exciting stellar combinations enhance new TV treats and prospects
EDITORS' PICK
Over 3 Million worth of prizes to be won at Smart Padala’s SENDali Manalo Promo!
Acer starts the year off strong with the Aspire Vero National Geographic Edition
Uproar over no vax, no ride policy: Maybe it’s time for gov’t to say sorry—Bello
97% of COVID-19 beds at PGH currently occupied
Japan brings back virus restrictions over Omicron surge
Gear up and get ready to play with Yamaha Mio Gear
MOST READ
1Sambayan names 7 aspirants in its 2022 Senate lineup
Emma Stone calls Andrew Garfield a ‘jerk’ after he ‘lied’ about his ‘Spider-Man: No Way Home’ appearance
Guevarra to Acosta: Obey rules on unvaccinated
PH to import 60,000 tons of fish to cover shortage
Don't miss out on the latest news and information.