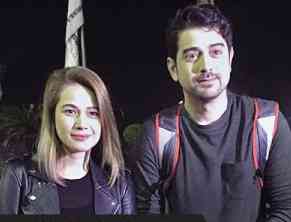 Talk about exciting casting combinations, ABS-CBN has just come up with an unexpectedly strong stellar brainstorm with its announcement last week that its new drama series, “A Love to Last,” will costar—Bea Alonzo and Ian Veneracion!

The casting coup is spot-on on several, potent counts: First, both Bea and Ian are easy on the eyes, so can you imagine how TV-genic and breathtakingly romantic their love scenes will be!

Next, they definitely aren’t just a pair of pretty faces, but have the well-honed acting chops (especially Bea) to imbue their romantic and dramatic sequences with uncommon “edge” and “bite.”

Finally, Ian is some 12 years older than Bea, so their new series could have a “May-October” vibe to it that would make it more thematically instructive and insightful than usual.

All of these plus points prompt us to put “A Love to Last” at the top of our list of 2017 TV drama treats, heartily hoping that it will live up to expectations.

Even as we welcome the new series with arms held extra wide, however, we again express the hope that, in 2018, Bea will do a drama series  with—

They’re the best actors of their generation, so it’s sweetly, perfectly “logical” to cast them together in a potentially explosive and memorable series— and step back as thespic sparks flash and fly!

A lot has happened to them in the years they’ve been apart, but their fans are antsily eager to see them together onscreen once more, so their new show can be expected to generate enthusiastic viewership.

Some months ago, we wrote about Kim’s “reel and real” tandem with Xian Lim and noted that it was getting to be a mite too “same-same,” so we expressed the hope that they would occasionally act with other screen partners, for variety and versatility’s sake.

So, the Kim-Gerald reunion is like an answered prayer—and we trust that Kim-Xian fans won’t take it against her if she “grows” her career in other directions.

After all, she’s already in her “late 20s,” so it’s time for more unexpected and “complicated” acting assignments.

On Gerald’s part, his career hasn’t been characterized by enough high points of late, with the exception of the acting “cred” he gained from tackling the unexpectedly gritty and gutsy role of a young hitman in “On the Job.” So, he needs a big, bright success to elevate his career arc—and “Ikaw Lang ang Iibigin” could be just what the show biz doctor ordered!

Other new series to watch out for include Daniel Padilla and Kathryn Bernardo’s “Wildflower,” and “My Dear Heart,” topbilling new child star Nayomi Ramos—and distinguished by the long-awaited return of thespic gem, Coney Reyes!