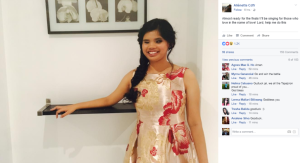 A beaming Katchcry Jewel Golbin poses for a photograph shortly before the grand finals of France Got Talent on Dec. 13, 2016 (morning of Dec. 14, 2016 in Manila) where she won third place. (SCREENGRAB OF MS. GOLBIN’S FACEBOOK PAGE)

ILOILO CITY — She may not have bagged the top prize but blind Filipino singing sensation Katchry Jewel Golbin still feels a winner.

“Third place! That’s more than enough for a mere Francophile who dreamed of nothing but a short vacation in France. Making it to a French talent show’s Grand finale is beyond my wildest dreams. That very first incroyable (incredible) talent performance I gave already made me feel like a winner,” Golbin posted on her Facebook page.

Golbin landed third among 12 finalists in the finale of the 11th season of the television program La France a un Incroyable Talent (France Got Talent) aired Tuesday evening (early Wednesday morning in the Philippines).

Her third place finish capped a fairy-tale run that exceeded expectations of her family and town mates.

“We are very proud of her. She is a jewel not only of Tapaz but of our country. No matter what, she’s a winner,” said Mayor Roberto Palomar of Tapaz town in Capiz, the hometown of Golbin.

“She won third place among many contestants and she’s not even French. That alone is an accomplishment,” Palomar told the Philippine Daily Inquirer.

Golbin, 26, thanked those who helped and supporter her.

“A million thanks to God for the talent and the spirit he endowed me, to my family who made me the artist and the person that I am, to my supporters all over France and back home for encouraging me and for helping me out all the way, and to ‘la France a un incroyable talent’ for letting me show my talent and for giving me a good reason to believe that I deserve my place not only in the show but also in the entertainment industry,” she said in her Facebook post.

Fans and supporters flooded her Facebook page with greetings and well wishes.

“Congrats! You are an inspiration to so many,” said Flor Garbo Gallaza.

Many thanked her for making Filipinos proud.

Golbin, “Jel” to her family and friends but known internationally as “Alienette Coldfire,” awed the show’s judges and audience for her singing talent and voice, proficiency in speaking French and her determination to realize her dreams despite her physical disability.

The eldest of three siblings, the English graduate of the Central Philippine University in Iloilo City was born premature and blind.

But with the support of her parents Edgardo and Estrella Golbin,m she finished her education.

Edgardo is a former overseas Filipino worker who drives a taxi while Estrella works as a clerk of the municipal government of Tapaz.

She has loved singing since she was a small girl and attempted to sing “Happy Birthday” when she was two years old, Estrella said.

In college, she enrolled in a French class as a course elective. But aside from her subject, she practiced speaking French with Facebook friends using a special software.

“Her teacher was surprised that she was advanced in speaking French because almost every night she spoke with her friends,” Estrella said.

Golbin explained to the show’s judges that she wanted to learn French because one of her idols was popular French singer Edith Piaf who sang the international hit “La Vie en Rose.”

Golbin first became an online sensation two years ago after a video of her singing Mariah Carey’s “I’ll Be There” at the SM City in Iloilo City became viral.

Her friends encouraged her to try out for France Got Talent.

She first submitted videos of her performing 10 French songs. She was later asked to send three more after she was shortlisted.

Her younger sister Kathryne Faith has been accompanying her in France.

In the elimination round, Golbin made one of the show’s judges cry for her rendition of Les Miserables’ “I Dreamed A Dream.”

She earned a spot in the finals after she sang “Les Moulins de Mon Coeur (The Windmills of Your Mind)” during the semi-finals on December 6.

Tapaz Mayor Palomar said they have started preparing a grand homecoming welcome for Golbin. But he declined to give details.

“It will be surprise for her,” the mayor said.

Estrella said what her daughter achieved was beyond what they could have imagined.

“We are not rich and when she was telling us what she hoped to achieve, like joining and winning the competition in France, I was tempted to kid her to wake up from dreaming. But she did it,” Estrella said.  SFM