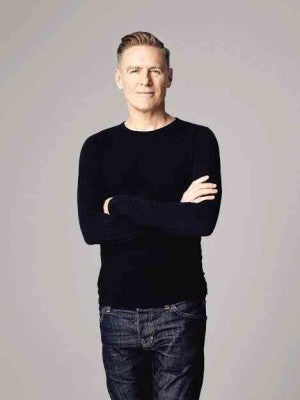 There are musicians who, upon entering the latter stages of their careers, become perfectly content with “nostalgia acts”—basking and banking on the power of their most popular songs from their halcyon days, as they tour and hold shows around the world.

If he pleases to, Bryan Adams could afford to be one: Throughout his formidable career that so far spans over three decades, the Canadian singer-songwriter has sold more than 100 million records.

His biggest hits alone are more than enough to assemble a packed set list: “Heaven,” “Straight from the Heart,” “Summer of ’69,”  “(Everything I Do) I Do It for You,” “Cuts Like A Knife,” “Have You Ever Really Loved a Woman,” “All for Love”—the list goes on.

But he chooses not to. At 57, the pop-rock star remains creatively active, his brain relentlessly churning ideas for new material.

Last year, he released his 13th and latest album, “Get Up,” which is also the title of his ongoing tour. He’s currently working with longtime collaborator Jim Vallance on the score of the coming Broadway adaptation of the movie, “Pretty Woman.”

The multitalented Adams, who also works as a professional, award-winning photographer and a staunch humanitarian, is set to have a concert on Jan. 18, 2017, at the Smart Araneta Coliseum—his first in the country since 1993. The one-night event is mounted by Wilbros Live (call 9115555).

The Inquirer’s e-mail interview with Adams:

You have been in the music industry for more than three decades now. What keeps you going? Music, what else! I just love what I do.

Is there an effort on your part to not go the nostalgia route? I have ideas for songs all the time, and I need to see them through, even late in my career.

At the moment, I’m working with my cowriter, Jim Vallance, in the musical production of the film, “Pretty Woman.”

Speaking of Jim, you have started working with him extensively again. How would you describe the partnership? It is hard work, but also a lot of fun.

Do you worry about what the critics have to say about your work—whether your album sells this or that much? I have never cared about either of those things—I just do what I do. And when I like it, I put it out.

What is the song that you will never get tired of performing? All of them! I love looking down at my set list after all these years.

Is there any song that you wish more people knew about? Yes—all of the tracks in my new album, “Get Up.”

Do you have any preshow rituals, superstitions? Just a cup of tea.

How do you think you have grown as an artist? I have stayed very consistent. At some point, I managed to work out what I wanted to do, and I have just stuck to it.

My thoughts about social media is that, as long as it does not take up my entire day, I am happy to potter with it.

Is the fulfillment you get from photography different from the one you get from music? It is a completely different oeuvre. But the principle of hard work applies to both, if you want to get something from either.

What has been your favorite shoot so far? Do you have a dream subject? It would be so hard to say.

Do you get to apply the things you learn and experience in photography into your music, and vice versa? Sometimes, a song can influence an image. But it isn’t always the other way around.

Have you thought about making movies? Yes, absolutely! Then, I woke up, and my tea was cold!