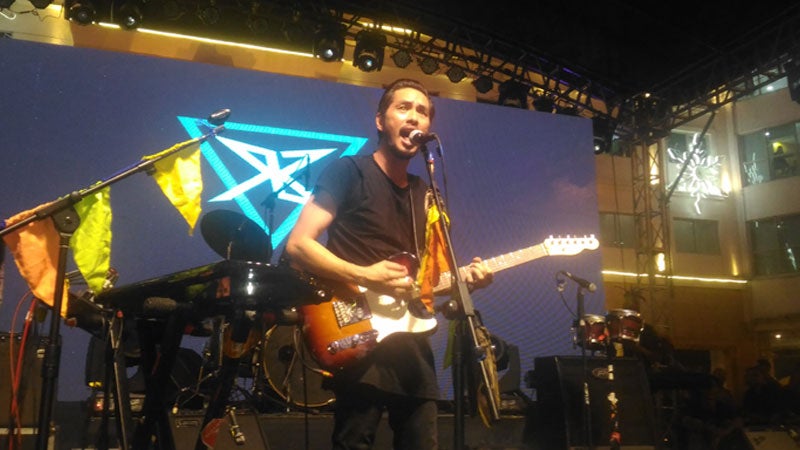 “We only write songs, but you guys make them hits,” Rico Blanco told the audience. Photo by Totel V. de Jesus

For a radio station born in the mid-’80s, the generation it catered to had these rock artists who made it big in the ’90s.

“In those years, the bands and the radio stations were partners. Those were good times,” said Blanco on stage.

The compositions of Buendia with The Eraserheads and Blanco with Rivermaya defined the era and, admit it or not, their music endured, while most songs by their contemporaries are now categorized under
nostalgia.

“Local radio stations and artists together can offer experiences such as tonight that Spotify and YouTube can never give the Filipino audience. So, brothers, thank you,” Blanco told the appreciative crowd.

Technology—or its bad side—nearly ruined the night. Blanco was the first to perform in a show delayed for nearly two hours due to technical problems.

Guitarist Ira Cruz, who played with Blanco, told the Inquirer backstage that they had their sound check as early as 4 p.m. By the time of their scheduled 8 p.m. performance, the “timpla” or blending of the sound system with the instruments was wiped out.

As if that weren’t enough, Blanco’s set was peppered with audio feedback. In the middle of a song, he would signal the control booth to turn off some microphones. Even in Buendia’s set, the last two songs were affected by this glitch.

It is easy to say it was mostly Buendia’s fans who gathered that night. People kept on chanting “Ely” before Blanco’s set and—predictably louder—after he left the stage.

But with Blanco’s trademark showmanship, he engaged the audience like how a Chris Martin or a Mick Jagger would. He danced like a robot or a madman for emphasis and played guitars, keyboards and, at some point, blew a whistle. He talked to the audience between songs and even asked them what they wanted to hear.

Blanco was accompanied by two mascot drummers dressed in what looked like a combination of Brazilian mardi gras and ati-atihan costumes.

To the delight of the ladies, in the middle of his set, while singing, he stepped down from the stage to meld with the crowd and gamely entertained quick selfies.

Whereas Buendia’s set list was 95 percent from his Eraserheads years, Blanco’s was 50 percent excerpts and full songs he did with Rivermaya and half of them from his albums as a solo artist.

He did more than a dozen titles and for his final thank you to music fans, he said: “It’s a privilege to go back to back with Ely. Tonight is about greatest hits. We only write songs, but we don’t write hits. The songs become hits because of you, guys.” 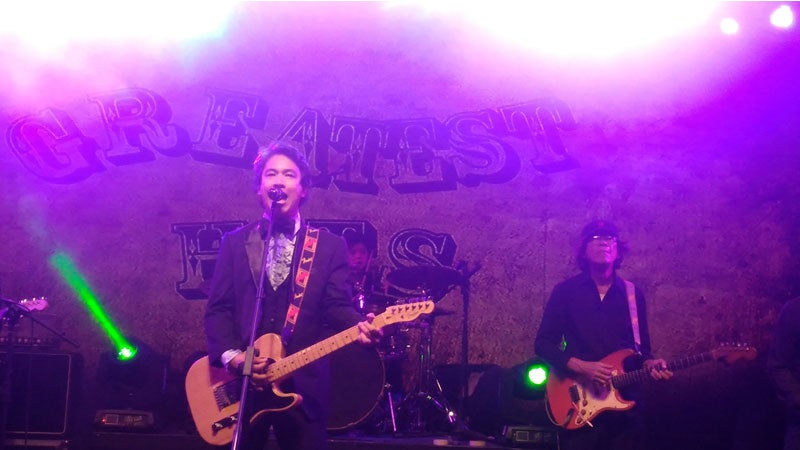 Ely Buendia sings hits he did with Eraserheads. His secret weapon, veteran axeman Nitoy Adriano at his right. Photo by  TOTEL V. DEJESUS

Call it his idea of perfection, the roadie has never been so busy as Buendia changed guitars for every song he played.

His band has three lady back-up singers, a lady bassist and a female drummer. His horn section was composed of three guys from the Bras Pas Pas.

Like a secret weapon, his guitarist was veteran axeman Nitoy Adriano, who gave the E-heads’ songs some bluesy flavor.

In vintage Buendia humor, noticeable was his Americana suit that reminded us of Dracula’s outfit with a black necktie on ruffled shirt.

Except when he congratulated the radio station, Buendia seldom talked to the crowd, letting his songs speak for him.

In Blanco’s set, we overheard people asking strangers beside them the title of a particular song.

But in Buendia’s, everybody knew the lyrics—and each song was punctuated with shouts and screams of adulation.