Marian, Ai Ai fire back at netizen who criticized breastfeeding

Nonetheless, an Instagram user commented that breastfeeding should not be done in public. Although the comment has been taken down, a great number of users, as well as Rivera and De las Alas themselves, defended the photo. 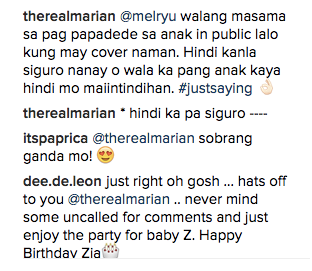 “Walang masama sa pagpapadede sa anak in public lalo na kung may cover naman. Hindi ka pa siguro nanay o wala ka pang anak kaya hindi mo naintindihan (There’s nothing wrong with breastfeeding in public, especially if there is a [nursing] cover. You are probably not a mother or you don’t have a child that’s why you don’t understand), ” Rivera responded. 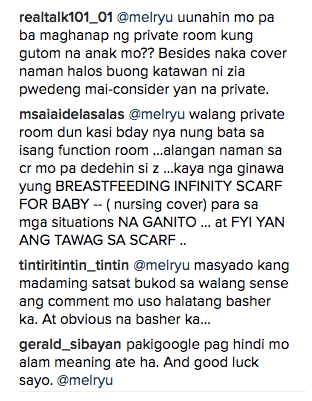 Rivera and her husband, Kapuso Primetime King Dingdong Dantes ironed out a lively first birthday party for their unica hija, which was attended by celebrities and key show-biz personalities. Rivera and Dantes celebrated baby Zia’s birthday in the same place where they had their first date eight years ago.

The Kapuso actress-host was earlier awarded as a Breastfeeding Influencer and Advocate by the Mother and Child Nurses Association of the Philippines Inc. for promoting breastfeeding awareness to the public.  Gianna Francesca Catolico

Marian Rivera is first Filipina to own The Princess Diana bag

Marian Rivera: Being a mother is priceless