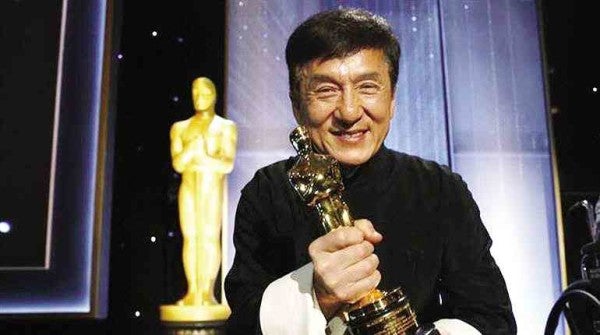 After starring in more than 200 films, Jackie Chan has established himself as a major screen icon, not just in Asia but also internationally.

But, all of his past achievements have been “trumped” by his latest and most unexpected accolade—an honorary Oscar awarded to him for his unique body of work by the US Academy of Motion Picture Arts and Sciences last Nov. 12.

Since only a few honorary Oscars are retroactively and cumulatively awarded, the encomium wasn’t just unexpected but also highly prized.

It was a belated acknowledgment of the fact that most of Chan’s big-screen portrayals in his long career may not have been “artistically awardable,” but some of them were uniquely difficult to pull off that they deserved to be specially cited, just the same.

In particular, Chan’s sui generis contribution has been in the field of action comedy, specifically in his rare ability to fuse comedic timing with phenomenal acrobatic martial arts wizardry!

Chan’s fans revel in their drop-jawed admiration for his amazing and dangerous stunts, which he executes with great precision—while making them look like they’re the easiest thing in the world to pull of.

This unique reputation has been hard-won, and Chan has many physical and medical “emblems” on his body to account for his multiple close shaves with danger—and worse.

His predecessor, Bruce Lee, also indulged in action comedy and risky flirtations with danger, but Chan has surpassed him with his seemingly aw-shucks improvisational derring-do. Which helps explain why all other “world-class” Asian film stars have never won an honorary Oscar—and Jackie Chan has!

Repertory Philippines is proudly closing its 2016 season with a musical bang with its year-end musical, “A Little Princess,” ongoing until Dec. 18 at the Onstage Theater, Greenbelt 3, Makati. Its young protagonist, Sara, uses her powerful imagination to transform her gloomy boarding school into a place of mystery and magic.

Everything’s plus size about the big, brassy and sassy concert, “The Big, Big Show” on Dec. 3 at The Theatre at Solaire, showcasing the abundant musical bounties of Radha, Frenchie Dy and Bituin Escalante.

Celebrating “the reality of the powerful feminine,” the big-bash concert interweaves a montage of life experiences that have shaped the artists and women that Radha, Frenchie and Bituin have become. With Mel Villena and the AMP Band. Call 8919999.

Every Wednesday at 9 p.m. is original movie night on the Lifetime channel. Titles include “Killer Coach,” “Indiscretion,” “The Wrong Child” and “The Inherited.”

More: “Man vs Child: Chef Showdown” is telecast every Monday at 9 p.m. And the dance tilt “Bring It On!” hits the screen every Saturday at 7 p.m.