How fatherhood and marriage have changed Dingdong 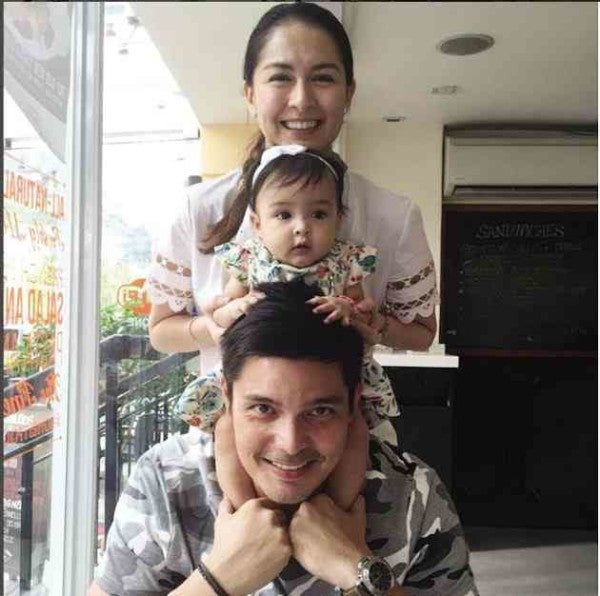 It was around this time last year when Dingdong Dantes began to take endurance running to heart. Thus, if his hectic schedule permits, he enters fun runs and half-marathons. And with each successful finish, he collects a medal, which he places beside the crib of Maria Letizia, his almost 2-year-old daughter with wife, Marian Rivera.

That’s how he keeps track of his progress. The goal is to run longer distances—and, hopefully—live longer for his loved ones.

“I’ve always known that keeping fit is important for my profession, but having Baby Zia made me more serious about it. I’ve been running, biking; I want this to be a way of life. I hope to be always there for my family,” Dingdong said in a recent interview at the Inquirer head office in Makati City.

“My daughter made me do it!”

Fatherhood, they say, changes a man. And in his case—apart from being more conscious of his well-being—Dingdong observed that he seemed to have grown more patient. It’s a quality that comes in handy, not only when taking care of his daughter, but in handling work-related intrigues, like the recent one about his ongoing television series “Alyas Robin Hood” being a copy of “Arrow.”

Dingdong, 36, is more relaxed these days, as well. He is no longer compelled to pursue many different endeavors all at once. And if needed, he has no qualms setting aside things he’s passionate about, for matters that he deems more important—at least for now.

In April this year, he resigned from his post as the commissioner at large of the National Youth Commission (NYC). The Kapuso star also entertained thoughts of joining the Metro Manila Film Festival (MMFF), but decided that doing his coming drama film, “The Unmarried Wife,” would suffice for this year. All because he wanted to spend more time with his family.

“But that doesn’t mean that I’m any less dedicated to my career and other things outside of my personal life,” Dingdong stressed. “It’s just that I don’t want to miss the important milestones in my baby’s early years.”

What else has changed? I took more risks when I was younger. Now, I think I’m more calculated, because I don’t do things just for myself anymore. I have a family to take care of.

Are you a hands-on father? Yes, I especially love bathing Zia—it’s my favorite activity with her. I change her diapers, too! Sometimes I bring her to taping, and put a hood on her… But when it comes to being hands-on, Marian is just on a different level. She does research, she talks to other moms. Karir! We have a helper, but my wife prefers to do things by herself.

Does Zia take after you or Marian? She’s a very happy child, so I’m going to say Marian. Zia’s very fun-loving and always smiling. She loves dancing and music. Ah, she drives me crazy.

You were a dancer. Well … yeah! (laughs)

Do you seek parenting advice from your father? We    don’t talk about it. I just try to remember all the good things he did, and learn from his example.

Is there anything new you’ve discovered about Marian? Marian is already very caring and malambing to me, but she’s 10 times more so when she’s with Zia, it turns out. I’m so proud of her as a mother. I really admire her.

Zia has appeared in a couple of ads already. Are you OK with her entering show biz someday? I won’t encourage or discourage her. I’ll support her whatever it is she chooses to do in life. I want to expose her to a lot of things. If she does end up wanting to act, I’ll have no problem with it. I’m very grateful to this industry. This is what gave me the opportunity to meet my wife, after all. But of course, studies should be the priority.

Marian had said in the past that she wanted a lot of kids, preferably spaced two years each. I didn’t receive the memo! But yes, we would love to have a big family. It took us some time to get married because we had a lot of things to take care of. But the moment we said, “Game!,” we knew that we’re ready to procreate and procreate—with “humanitarian” considerations, of course! But really, it’s up to Him.

Have you set aside public service? I resigned from the NYC, because I needed time for my family. But my passion and commitment to public service, as well as upholding my role as a responsible citizen, will always be there.

Has there ever been a concrete plan to run for public office? Nothing specific. You don’t have to have a position to help, although it’s much better and easier if you had one, of course.

What are your current advocacies? I was very much into climate change and disaster risk reduction and management before I left NYC. That’s something I still focus on through my foundation, YesPinoy. We want to educate the people about the issue, and tell them that you don’t have to be a superhero to do your part.

What were the challenges? What have you learned? That you can’t solve things overnight, especially with limited resources and time. Programs need to undergo different stages, like planning, processing and actually executing them… But just when you think everything’s set to go, new issues that need addressing would come up, like what happened when “Yolanda” [hit the country in 2013].

But more importantly, I’ve realized that we really can’t just rely on the government alone. No matter how dedicated the people inside are, the results wouldn’t be as good if we don’t do our own part.

What are your thoughts on celebrities entering politics?  We all have equal rights to serve, given the limited qualifications that are required. For me, you have to think, “bayan bago sarili,” and back it up with competency, a clean track record, authenticity and compassion for other people. Therefore, I think people from the entertainment industry can also become good—even outstanding—public servants.

“Alyas” did well despite claims that it was a copy of “Arrow.” From the start, the objective of the show has been clear to us. We weren’t affected by what others were saying, because the intention was solid, which was to produce something timely for the audience.

We were confident. So when the criticisms came, we were like, “Uy, ano ’to?” But we were so busy taping we weren’t really affected. We didn’t change anything. We stuck to our ammunition and did what we thought was right.

How did you personally feel about the bashing? There are lots of sources of entertainment now and we all have options to watch whatever we please—nothing wrong with that.

I simply felt that there was unfair judgment, because of wrong information. I respect people being fans of a particular show, and I respect the opinion of those who don’t want to watch free television.

We just had to exert a bit more effort explaining our side.

You mentioned that you’re more patient now. Would you have lost your cool if this happened when you were younger? I’m sure mapipikon ako. But I’m happy. It’s also good to have check and balance. It’s good to know that the audience is giving opinions about our work. It compels us to revisit what we’ve been doing, see what needs improving, and boost the strengths even more.

You’re very proud of this project. I’m blessed to have been given material like that. The show discusses what happens in our society, the injustices and a lot of other things… I’m thankful I was given this role especially at this time in my career, and at this time in our country, given everything that has been going on. I think the show can serve as a reminder or a reality check.

You’ve said that the series tackles issues happening right now. Is there any particular one you feel strongly about? Taking justice into your hands. While my character is seeking justice for being wronged, he doesn’t kill. Sometimes he just links those in need to the proper authorities.

Does the show consciously take jabs at current social issues? That’s up to the audience’s interpretation. If you think that the story or events are similar to what’s happening in the country, then maybe ask why?

Maybe because people are more involved than ever… It shows that the viewers are in touch with the news, which I think is good.

Tell us about “The Unmarried Wife.” This is my fourth project with Star Cinema, and my third with Angelica Panganiban. It’s a relationship drama about a troubled marriage and the challenges a couple seeking annulment goes through.

It’s even easier working with Angelica this time, because we’ve already played a married couple in the past. We have an idea now how each of us would respond in certain situations or particular stimuli.

Is it about infidelity? It’s just one of the many issues the movie takes on. The story is more about showing how flawed we are as people, especially when we’re in relationships.

You’re one of the few exclusive network talents who gets to shuttle around. It’s a rare privilege. Nowadays, exclusivity is very important, both for networks or movie outfits. But if we unite for a common objective, we can break such barriers. I hope we see more collaborations among stars of different networks. Maliit lang ang industriya.

You said you thought about joining MMFF this year. What do you think about the new screening procedure, which requires producers to submit finished films? I agree with having stricter measures for better quality control. This way, producers are forced to deliver what the script originally promises. For many years we were only required to submit scripts, which can change along the way. Sometimes even the cast changes.

So what’s up for you as a producer? Last year I didn’t do a film, because I was concentrating on my job at NYC. This year, I planned to do one, but other things came up. We have exciting projects lined up. It’s all a matter of right timing. I hope to do at least one in 2017.

I want to make a third installment of my “Aswang Chronicles.”

What kind of fulfillment do you still get from show biz? As an actor or producer, you have different measures: longevity, ratings, awards, number of programs starred in or created. But that’s something that can be forgotten.

What’s more important for me are the friendships I create, and learnings I get along the way. And I’m always hoping to experience something new I could cherish forever.

Do you still have a dream project? To do a sitcom with Marian!