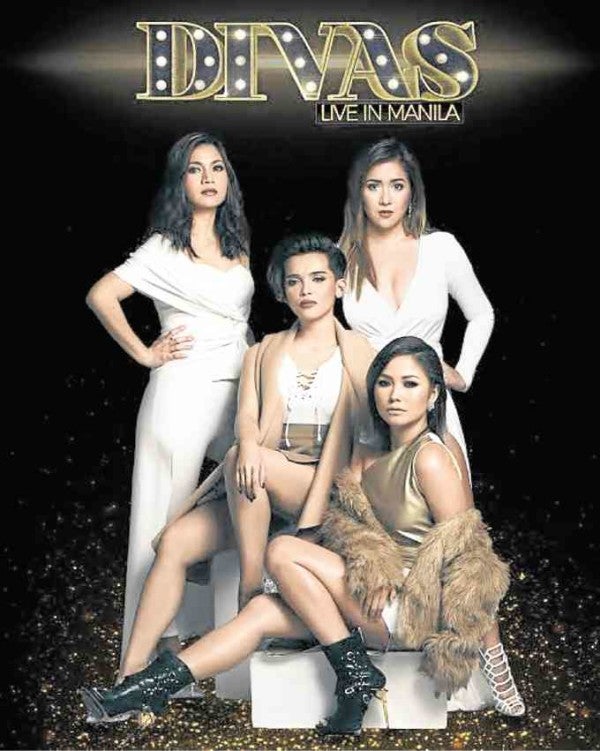 Though they’re disappointed that Rachelle Ann Go had to withdraw from their coming concert in favor of another project, Yeng Constantino, Kyla, KZ Tandingan and Angeline Quinto — who will coheadline “Divas: Live in Manila” — believe that their colleague and “sister” have made the right choice.

Rachelle Ann, who plays Fantine in the current West End staging of “Les Miserables,” is expected to make her debut on Broadway next year, as part of the US cast of “Miss Saigon,” where she will reprise the role of Gigi van Tranh.

“From London, she will go to New York … Unfortunately, our rehearsals won’t jibe with her own schedule,” Yeng said at a recent press conference for the show, which is set on Nov. 11 at Smart Araneta Coliseum (call 911-5555). “This is a big break for her — and it’s her passion. We’re all fine with her decision.”

Kyla added that if they were presented with the same opportunity, they, too, would find it extremely tough to resist. “She messaged us individually, saying how sorry she was and that she badly wanted to be with us in the concert,” she related. “We were surprised … but she had to choose.”

Angeline, on the other hand, jested: “She’s much richer! But seriously, we understand … If she can’t be with us, we will be the ones to visit her, instead.”

But if there’s one good thing about Rachelle Ann’s absence, they all agreed — jokingly, of course — it’s the possible bump in their respective paychecks. “We’re now deciding how to divide her talent fee among ourselves,” Angeline quipped.

The billing is not an issue; it doesn’t matter who goes first or last, they said. Each artist will get equal number of performances that will allow them to show off their artistry and musical styles: Kyla leans toward pop-R&B; Yeng, pop-rock; Angeline, pop; and KZ, soul and jazz.

But as the relative newbie in the group, KZ said she doesn’t mind having to adjust or compromise. “I’m the youngest in show biz here,” she pointed out. “I know my place.”

The repertoire for the one-night show — mounted by Cornerstone Entertainment — will feature the quartet’s biggest hit songs, each treated with fresh arrangements and interpretations. Fans can also expect eye-catching gowns and costumes, they assured fans.

Originally, the term “diva” is used to describe exceptionally talented female singers in opera, as well as other fields of art. But through time, the word has also taken on a negative connotation. “Diva,” in modern usage, could also mean someone who’s self-absorbed and hard to work with.

For Kyla, a true diva is an artist who knows her worth. “A diva is incredibly humble, but whose talents and skills overflow. She doesn’t need to do something over the top to get noticed,” she said.

Angeline doesn’t get offended when called a diva, because a vocalist she grew up admiring, Regine Velasquez-Alcasid, is considered one.

But more than her artistic gifts, a diva, Yeng said, is defined just as much by her
resolve. “She’s a strong woman who has been through a lot,” she explained. “She doesn’t give up on her dreams. And when she falls, she gets right back up — smarter and stronger.”