From the archives: Eddie Garcia gets his thespic mojo back | Inquirer Entertainment
Close
menu
search

From the archives: Eddie Garcia gets his thespic mojo back 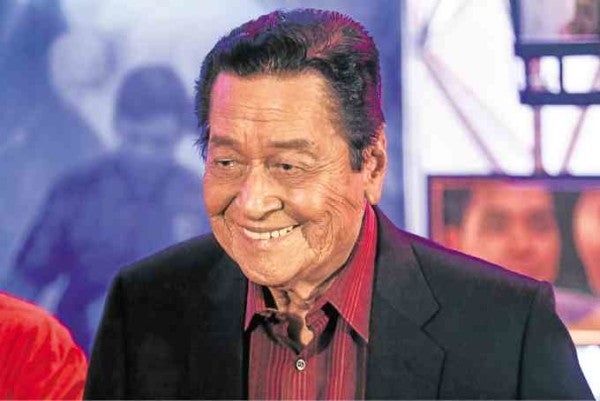 Young actors who want to have really long and productive careers in the performing biz should learn a lot from catching Eddie Garcia’s portrayal on “Ang Probinsyano.”

He’s the oldest member of the popular action-drama series’ regular cast (by far!), but he’s also one of its most dynamic players.

Eddie may already be an octogenarian, but he obviously still enjoys and even loves acting, hence his unabated penchant for “biting” into his character in the show.

The fact that he’s been cast as the series’ most senior villain makes his performance all the more instructive.

Most “old” players resign themselves to portraying weak and placid lolos, but Eddie’s character in “Ang Probinsyano” comes across even more dynamically and “deliciously” evil than the much younger actors who play his similarly dastardly son-in-law and grandson!

What spells the big difference for Eddie? While his “nasty” coactors content themselves with arch and cool stereotypes, “old” Eddie strives to understand, identify with and embody his character’s lifelong desire to become as rich and powerful as possible—at all (illegal) costs!

Why can’t some younger actors do this as well? Basically, because they don’t think it’s all that important. They’re content to just play themselves—or an “evil” variation on their usual screen persona, and think that the viewing public doesn’t expect anything else—or more.

Well, only a few “old” stars remain as “in demand” as Eddie Garcia, so it obviously does make a key difference.

Another plus Eddie has going for him is his also being an award-winning director, so even when his saddled with an undemanding or uncreative TV megaman, he pretty much can just direct himself, so he isn’t limited by his directors’ limitations!

There was a time, some seasons ago, when we saw Eddie kind of losing his thespic mojo and coming up with relatively listless and colorless portrayals.

Perhaps it was due to the fact that the predictably good and genteel lolo characters he was assigned to play were too predictably “nice” to challenge him?

Well, the absolutely evil crime lord he’s portraying in “Ang Probinsyano” must have “awakened” and heated up his creative “juices,” because his “mojo” is back in full froth, boil and sizzle.

So, his coactors have to work hard and dig really deep to avoid ending up as also-rans—and afterthoughts!