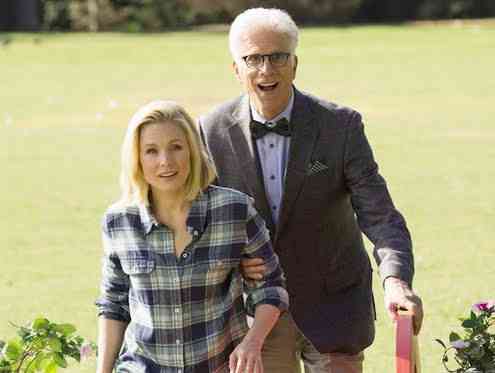 One of my most unexpectedly pleasant viewing surprises last month was “The Good Place.”

The creatively conceptualized and staged sitcom was set in a sort of “heavenly” place, where a few lucky souls were accorded a blissful “extra-existence,” with everything provided for them. Don’t worry about a thing, just have a great time!

Such a pluperfectly happy scenario sounds really great—but, its appeal would quickly wane if everything is always too good to be true—it would end up being too predictable and boring as all heck.

So, even more cleverly, the fun series presents its idealized “world beyond our own” through the jaundiced and cynical eyes of a young woman who is a world-class user and self-absorbed b*tch—the very opposite of the saintly souls “the good place” is supposed to be reserved for.

So, how did she manage to get in? She’s the exception to prove the place’s pluperfect rule!

Trouble is, her nasty and wily ways wreak havoc on the heavenly place’s perfect set-up, resulting in horrible “accidents” that are actually unexpected consequences—like a thunderstorm of trash when the “nasty exception” doesn’t collect the garbage she’s been instructed to sweep up!

So, the ostensibly perfect place is in danger of self-destruction, just because this single “exception” is behaving like such a b*tch—and witch!

The only way to prevent this dire prospect from happening would be for her to really become a better person—which is much easier said than done.

Still, she decides to give it her best shot—but often flubs and flops occasionally in shocking and  funny ways.

Those wicked and wacky flips and flops are what keep viewers grinningly watching—to see what inadvertent lulu she will come up with next!

Aside from its entertainment value and drolly idealized visuals, “The Good Place” is a viewing treat, because it has a lot to say about how we should and  actually live.

There’s no such place like its pluperfect setting, but its lone interloper’s bumbling and bungling efforts to acquire values and morals retroactively offer specific object lessons on how we too can improve our individual and collective acts.

Contrastingly, the fact that this nether world is too good and perfect to be true makes some of its goody-goody denizens objects and targets of spoof and satire—so, a number of bumptious and puffed-up individuals and institutions in our own world are effectively and mirthfully—cut down to size!