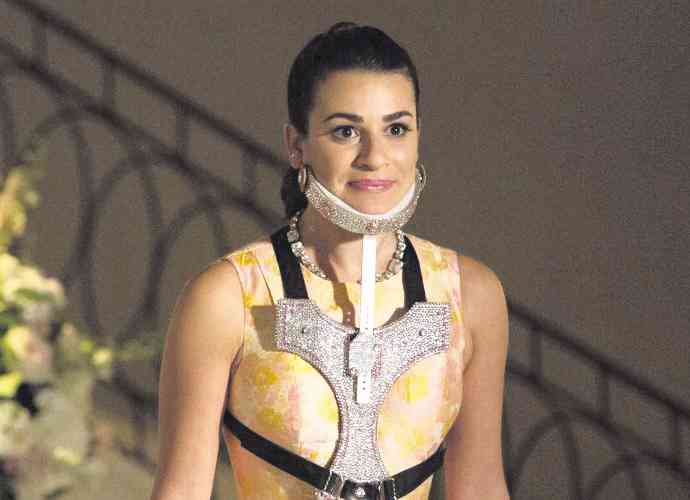 Los Angeles—Lea Michele has gone from glee club captain to scream queen, both thanks to Ryan Murphy. The singer-actress told us the very Hollywood movie-like story of how she met Ryan, who wrote the Rachel Berry character in “Glee” for her.

The writer-director-producer has cast Lea again in the comedy-horror TV series, “Scream Queens.” She plays Hester Ulrich, a sorority girl who was revealed in the Season 1 finale as the serial killer on campus.

In Season 2, the series moves to a hospital where Lea relishes playing Hester a la Hannibal Lecter. “The set is in the same location where I did ‘Glee’ for years,” said the actress, lovely in an Elie Saab burgundy pantsuit. She welcomed the chance to wear something elegant. “I’ve been wearing a prison jumpsuit for days,” she explained.

Lea, who debuted on Broadway at 8 years old as the young Cosette in “Les Miserables,” also dished about her coming second album, buying her own house and turning 30.

How did you and Ryan meet? I met Ryan in 2007. I was visiting Los Angeles with a friend (Jonathan Groff) who was working on a show with him. I went to dinner at Chateau Marmont. I was thinking I would never be cool or pretty enough to ever be in this town. There I was in a shiny purple silk dress with ruffles down the chest. Little did I know that I was more Rachel Berry than I realized.

Ryan ended up writing the show with me in mind. He’s always been my advocate. He’s been a good friend, as well as my boss. When “Glee” was wrapping up, I got nervous and thought, what’s next … what’s going to make people see me in a different light?

Then, Ryan wrote this role for me. This is television’s golden age. I believe Ryan is at the forefront of that.

That fateful dinner at Chateau Marmont is a very Hollywood story. If you did not get that dinner opportunity, what do you think your life would be?  I was working on Broadway (“Spring Awakening”) and my costar, Jonathan Groff, took the week off to go to California to film Ryan’s TV show (“The Normal Heart”).

I went to work one day and the doors were locked, because the stagehands went on strike. It was one of the few times in history that there were no Broadway shows. I went home and told my boyfriend, “My God, the shows are off. We have a week. What should we do?” He said, “I’m breaking up with you.”

My best friend wasn’t there. I called Jonathan and said, “I’m coming to LA.”

I still think if all of those things hadn’t happened, I probably would never have met Ryan. I have to believe it was always meant to be.

How interesting is it for you that your character in “Scream Queens” evolves in different scenarios?  I’ve gotten to play many different versions of Hester so far. I played Hester as a Chanel (as all sorority girls are called), the killer and then, toward the end, with the eyepatch. In Season 1, I was lucky to play different versions of such a delicious character.

In Season 2, I play a new version of Hester, mirroring something similar to “The Silence of the Lambs” (Hannibal Lecter).

I love playing crazy. It’s much darker this season.

How different is your experience so far? I was looking forward to playing a character that (would) allow audiences to see me beyond Rachel Berry. This role has done exactly that. After I said the line, “Are you man enough to attack my crack,” people forgot about Rachel Berry. Not that I would ever want to forget her because I love her.

Ryan writes such amazing roles for women. And this character [is] the comedy element in “Scream Queens.”

This season, we have Kirstie (Alley) and John Stamos. As an actor, between the material and the people I get to work with every single day, I really feel like I’m growing.

How is the second season shaping up? All of Season 1, we didn’t know who the killer was, so I was playing this character (Hester) thinking, OK I could be the killer.

In Season 2, knowing Hester is the killer, I feel like I have so much more freedom. I could be as crazy as I want to be.

You have your own house now. How domesticated are you?  I’m very domesticated. I love cooking, I love cleaning my house. I’m a boring 30-year-old who stays at home with her cat and cleans her house, as unexciting as it sounds. But I love it.

I used to live in Hollywood. I just moved farther away to get more fresh air … I’m loving my house in the canyon, driving by coyotes at night.

What’s the update on your second album? It’s done. It’s going to come out in early 2017. I think everyone will love my album. It’s a lot more of the type of songs I grew up listening to, like Céline Dion and Barbra Streisand. It’s more theatrical than my first record. I think that’s the kind of music people want to hear me sing.

I wrote a very personal song—“Sentimental Memories.” There’s also a beautiful song called “Love Is Alive.” That one I’m most excited about, because I’ve been through a lot. It’s important that everyone knows where I am in my life right now, which is very positive, happy and hopeful …

Do you feel like 30 is a turning point?  I didn’t think it was a big deal until my birthday dinner. Suddenly, everything was going in slow motion. I realized it was a big turning point. I’ve been so blessed (and have) had so many incredible experiences.

I want to continue to challenge myself. This would be a good time for me to focus on my music, as well.

I look forward to this next phase of my life. I went from playing a high school student to a college student. So I think I don’t need to focus yet on being 30. I can still get away with playing a little younger. I don’t think people are ready to see me play a mom yet.