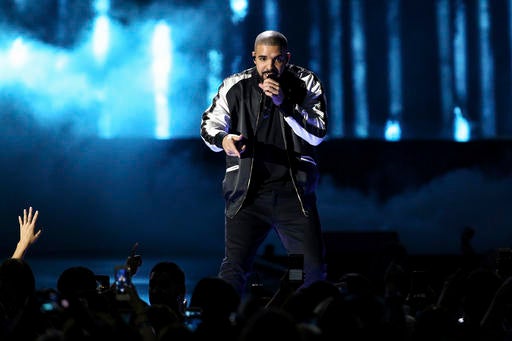 In this Friday, Sept. 23, 2016, file photo, Drake performs at the 2016 iHeartRadio Music Festival – Day 1 at T-Mobile Arena in Las Vegas. Drake earned a record-breaking 13 American Music Awards nominations on Monday, Oct. 10, thanks to his latest album “Views,” shattering Michael Jackson’s mark of 11 nominations in a single year from 1984. (Photo by John Salangsang/Invision/AP, File)

The Toronto rapper, whose “Views” has been the top-selling album released this year in the United States, was in the running for Artist of the Year and raked in other nominations thanks to his slew of collaborations.

But on the same day as his nomination glory, Drake postponed the final three performances of his “Summer Sixteen” tour under doctors’ orders, his spokesperson said.

“Drake suffered a severe ankle injury during the tour which he did his best to power through. By doing this, he made his injury worse,” the spokesperson said, adding that Drake needed time to recuperate and “give fans the performances they deserve.”

Drake, whose hits such as “Hotline Bling” have won him an avid fan base, had been due to play two nights in New York’s Barclays Center before closing his tour Saturday in nearby Newark.

The rapper, who turns 30 later this month, beat the nomination record set by Jackson, who in 1984 was in line for 11 awards amid the colossal success of his “Thriller” album.

Winners of the American Music Awards are based on fan voting in contrast to the more prestigious Grammy Awards, for which the Recording Academy surveys industry professionals.

Boy band One Direction, who were never nominated for a Grammy, won Artist of the Year at the past two American Music Awards.

ABC television, which will broadcast the awards gala in Los Angeles on November 20, announced the nominations on its “Good Morning America” program.

The other nominees for Artist of the Year include ballad singer Adele, whose “25” released last year is the strongest selling album in years and considered a Grammy front-runner, and pop diva Beyonce.

Grammy nominations are expected to be unveiled in early December, with the awards taking place on February 12.